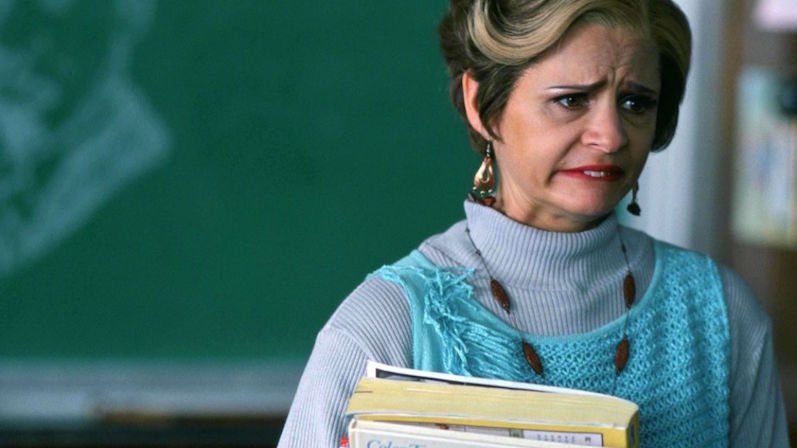 A SITDOWN WITH “STRANGERS”

Six years after Jerri Blank, a middle-aged high school student with a sordid past as a “boozer, user, and loser,” and pivotal character in the Comedy Central series STRANGERS WITH CANDY, slouched morosely off the small screen, she has triumphantly returned for more abuse from the judgmental students and teachers of Flatpoint High School in a theatrical prequel, which opens this month.

SAGIndie recently sat down with AMY SEDARIS and PAUL DINELLO, two of the three minds behind Strangers (hot-shot talking head Stephen Colbert being the third), to talk about finding and losing (and finding again) the money for your film, directing your friends, the film festival circuit, and the joys of residual checks.

SAGINDIE: How did the notion of taking Jerri to the big screen come about?

AMY SEDARIS: We were working on a book called “Wigfield,” and we kept improvising little bits here and there. Eventually we pulled it all together, and said “Hey, we have a script.”

Was the movie a hard sell, or did the show’s popularity make it an easy pitch?

PAUL DINELLO: It wasn’t even a pitch. Mark Roberts, a producer here in L.A., called and said he had a guy with money sitting in the bank, did we want to make a film, and I told him we just happened to have a script. So we started the process, and then a week or so before we began shooting, Mark called and told us the guy had left town, and taken his money with him. I thought that was it, I was already moving on to the next thing, because everything was so tightly scheduled, I figured any kind of delay would lose us everybody. We had people who could literally only give us 10 hours. But in the end, we found the money, and went ahead.

Paul, on this film you’ve made the jump to directing feature films. Can you talk a little about that experience?

AS: Well, Paul had actually directed some shorts-

PD: Yeah, so it was just a matter making some adjustments here and there, really.

Which was more nerve-wracking: directing Phillip Seymour Hoffman, or directing your friends?

AS: Oh, that’s a good question.

AS: We all kind of direct each other-

PD: Yeah, and for everyone else they just needed some tonal adjustments so they would fit in with the world we were creating. Initially I was nervous, but once I started working with them they made it really easy on me.

You guys all have such strong improv backgrounds. How much of the final film is as scripted, and how much is improvised material?

AS: There are pockets in the film where we were allowed to improvise, little moments.

PD: We like to play with words and twist meanings, and that’s hard to improvise, so a lot of it was carefully scripted. Plus, we only had 24 days to shoot, so I didn’t have the luxury of a lot of takes. I seldom do more than 3 or 4 takes, unless there’s so kind of technical issue. But again, I was lucky, because when you’re doing a scene with Phillip Seymour Hoffman and Allison Janney, they’re going to nail it. If you’re doing an independent film with actors who don’t have a lot of experience, I can see that that would be a recipe for disaster, but when you use top talent it allows you to shoot in 24 days. And Amy and Stephen are amazing; they nail it almost every time.

What a great cast. Did you set out to create an all-star cast, or was it a case of people just wanting to work with you guys?

PD: Maybe half of the cast came to us that way, and then we had a wish list of people we went after. Allison Janney, we didn’t have a relationship with her at all.

AS: We sent her a script. Dan Hedaya you sent a script to.

PD: And Sarah Jessica Parker, Matthew Broderick, Justin Theroux are all friends of ours.

AS: I think the only two people who actually came to us through a casting director were Christopher Pratt and Elisabeth Harnois.

PD: Yeah, Chris actually was a fan of the show and paid to fly himself from Utah, where he was shooting Everwood, to New York to audition for us.

AS: And the minute we saw him, we were like, “That’s Brason”.

PD: And we brought back as many people from the show as possible.

AS: We only recast people who had gotten older, because Jerri had to look older than them.

You shot the film under a SAG Low Budget Affirmative Action agreement. Was having a diverse cast important to you?

PD: Shooting under that agreement didn’t add any pressure, we would have cast that way anyway. I think we like a diverse cast because it’s just more interesting that way. We’re looking for interesting people, and that’s a lot more broad than having just white people.

AS: We want that diversity of experience, because it sort of informs everyone’s work. Like when we were first up on the Second City mainstage, everybody was from, like, Ohio, but then we came, and I’m from North Carolina, Stephen Colbert is from South Carolina, and Paul’s from Chicago, and we brought our own experiences, and that influenced and changed things, for the better. I think it’s the same way on the film, just having people from all walks of life makes it richer.

You took the film to Sundance, where it was one of the toughest tickets in town. How was that experience?

PD: Yeah, we did the parties and we did the photo ops. It was interesting because I had been there seven or eight years ago with a short film, and it was a lot of me standing outside in the snow looking through windows at other people’s parties. It’s a lot different experience when you’re sort of on top of the list.

AS: This all new to me, these press junkets and everything, I call Sarah and Phillip and say, “This is what you do for a living?” I mean, you do 48 interviews in a day, so when I talk to them now, I don’t want to ask them anything. I don’t even want to ask them what they had for dinner. And if you invite them to a premiere, that can’t just show up, people want to ask them questions and take their picture. I never saw it from this side before, I mean this is on a smaller scale, but I can imagine what that would be like.

Did you go to any other festivals, or was Sundance the one?

PD: I think that ThinkFilm has been very good for us. One the benefits of being dropped by Warner Brothers, or whatever happened, is that the film got a second life in film festivals. I’ve taken short films to Berlin, Sundance, New York Underground, so I love the whole film festival circus-

PD: Circuit! And I like the whole community aspect, hanging out with other directors. When we got picked up at Sundance, they didn’t want to do any other festivals, but when ThinkFilm got a hold of it, we did Seattle International and CineVegas, which was an experience.

AS: New York, San Francisco, too…

Amy, is this it for Jerri, or are there more stories left to tell?

AS: It’s like Paul says, she’s like a bad rash, you never know when she’s gonna reappear. We never plan anything, but I’ve always said I’d like to do a movie of the week, a Christmas movie with Jerri.

What’s next for you guys?

AS: Well, I’m working on a cookbook, it’s more like an art book. Paul helped me write it, so that’s coming out in October. So I’m in deadline city right now. This wouldn’t be so hard if I didn’t have that hanging over me.

PD: I wrote another feature that I’m going to shoot in the fall.

AS: And he needs to let me know when he’s having auditions. He’s got to have a little something in it for me.

Open forum time. Do you guys have anything to say about SAG to our readers?

AS: It’s so exciting for me to get that big envelope in the mail with a residual check. I have it sent directly to me, so I can just enjoy that moment. I know if something has run, and if it’s like Maid in Manhattan or something like that, it’s very satisfying to get that check.