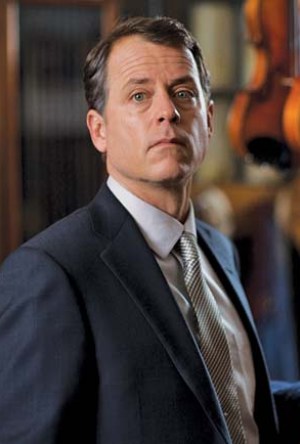 Why scheme, lie, cheat, and steal? Because an honest day’s work is so darn hard, and the payoff is usually higher; at least that’s what Mickey Prohaska would have you believe in the 2011 Sundance film THE CONVINCER. Mickey (Greg Kinnear, As Good as It Gets, Little Miss Sunshine) enters every scene with one objective in mind: how can I get more out of this situation? His vile, unapologetic persona is always on the lookout for another scam, and he’s about to unearth his easiest con yet. Once his plot is put into motion, nothing, and no one, can stand in his way. Or, so he thinks.

It all begins at an insurance convention where Mickey convinces a fresh, eager salesman, Bob Egan (David Harbour, War of the Worlds, Quantum of Solace), to accept a position with Mickey’s insurance company, instead of a high-paying offer with a larger firm. Mickey exaggerates his office space, his staff, his clients, his income, everything really, so he can hook Bob. Bob joins his team, and Mickey assigns him to the clients who are the farthest drive away from their office. This little bit of employee abuse backfires when Bob comes across an old man, Grovy Hauer (Alan Arkin, Catch-22, Little Miss Sunshine), on a farm estate with a rare and valuable violin in his attic.

Mickey jumps on the chance to steal this client and handle Mr. Hauer’s insurance needs himself. He has the violin appraised by a persnickety violin shop owner (Bob Balaban, Gosford Park, The Majestic), who tells him the artifact is worth 30,000 dollars. This is the exact amount Mickey needs to patch things up with his wife. Prior to the start of the film, he had emptied their joint bank account without her knowledge, leading to their current separation. He sets his plan in motion to lift the violin from spacey Old Man Hauer, but neighbor BG (James Stordahl), as well as security installer Randy Kinney (Billy Crudup, Big Fish, Watchmen), foil his plans.

Have no fear; Mickey is a smart, conniving man, and he continually adjusts his plans; as one door closes, five more open. The Convincer is a maze of plot twists. The story unfolds with Mickey starring as stage director, the man behind-the-scenes, pulling the strings on his many puppets, but, really, Mickey may not be the show runner he’s convinced himself he is. Self-absorbed, Mickey sees the world with blinders on. He is so untrustworthy, it is undoubtedly his own fault that he doesn’t recognize dishonesty in others. His world and the cast of characters around him, truly, are not as they seem.

Kinnear, Harbour, Arkin, and Balaban feed off of each other’s energy. Their dynamics are entertaining to watch and each accomplished actor shines in their assigned role. The Convincer is an unexpected film. Writers Jill and Karen Sprecher have woven quite a yarn, and Jill’s steadfast direction completes this wry and guileful picture. Much like the film, I have waited until the last act to tell you what it’s really all about; The Convincer is fairly smart, dark, and oddly humorous in a toned-down kind of way. Mixed into this fun, mysterious farce is a splash of The Usual Suspects, a touch of Fargo, and just a hint of The Red Violin.  Ultimately, though, this movie stands up on its own with a unique, dark-humored tone and unraveling plot. Sit back, relax, and enjoy this film!—

If you can ever find it. I saw The Convincer when it premiered in January 2011 at the Sundance Film Festival, in Eccles Theater, in Park City, Utah. Since then, I have read that it has undergone many changes, and it is not the film I saw at Sundance. We will have to wait and see what its final version will be like. I have not seen this new version, so I cannot comment on it in any way. I can only hope that it somehow remains the film I enjoyed at Sundance. For information on the changes, check out this Indiewire article as a starting point.