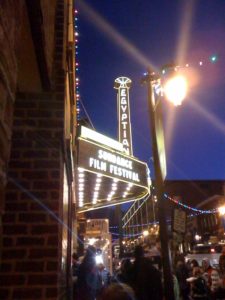 We admit we’re a week or so behind in getting our Sundance recap out, but better late than never, right? Right, guys?

Overall, Sundance 2011 was a blast. The films were great, the parties were fun, and the weather was amazing. We couldn’t have asked for a better experience to kick off this year’s festival run. Below, a few of us have listed the films we saw and included special commentary on some of the ones that really stuck out for us. We highly recommend checking out all of these if and when they come to a theater near you. Enjoy!

The Guard (Just my kind of movie, small, quirky, but really great performances.)
Martha Marcy May Marlene (Intriguing and gripping performances.)
The Ledge
To.get.her
Red State
Cedar Rapids
The Details (For the single best confession scene.)
Sound of my Voice (For leaving me wanting more.)
Homework
The Convincer

The Guard
Win Win (Tom McCarthy does it again!)
Red State
Cedar Rapids
The Ledge
The Off Hours (Made by Seattle filmmakers in Seattle. NW represent!)
Terri (I can’t say enough about this film. So funny, touching, and beautifully made.)
The Details (Also made in Seattle.)
The Convincer (A dark, twisted tale that had my attention the entire time.)
Submarine

The Guard
Martha Marcy May Marlene (well paced, engaging story with great performances.)
The Ledge
Win Win (Paul Giamatti had me laughing from the start.)
Cedar Rapids
Red State (for trying something different and for an indelible performance by Michael Parks.)
The Troll Hunter
Terri
Take Shelter (an extremely well-acted character study, Michael Shannon rocks.)
The Details (for its unique and absurd tone.)
Homework
The Convincer