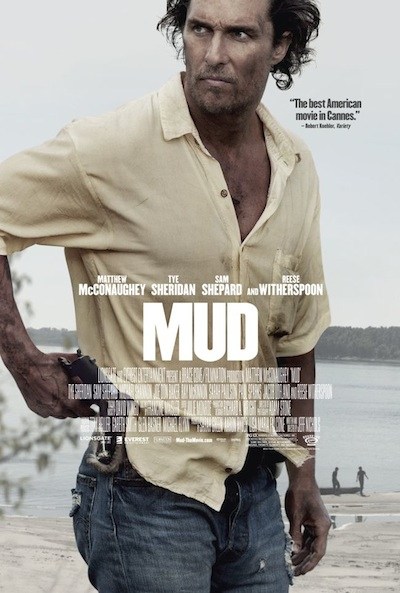 MUD is the latest film written and directed by Jeff Nichols. Nichols wrote and directed 2007’s Shotgun Stories and 2011’s Take Shelter (one of my favorite Sundance movies from that year). Nichols has proven that he understands character, and Mud, a true bildungsroman, is no exception. Two impressionable teenage boys living in the rural South discover a fugitive hiding out in marshland, and they agree to help reunite him with his true love.

Matthew McConaughey stars as the fugitive known as Mud. He’s taken refuge in a storm-ravaged, shipwrecked boat in the middle of marshland, a place that typically remains deserted. He has bounty hunters on his tail, as well as police. No one is able to figure out his whereabouts until two teens, while adventuring in their free time, stumble upon the boat.

The role of Mud allows veteran actor McConaughey to really use his acting chops. He impresses as a sun-drenched, weathered man on the run who relies on the good in himself to get by day-to-day. He is a complex man, a fugitive we are supposed to empathize with, but he earns that role, which is largely due to McConaughey’s performance. His two teenage confidants, Ellis (Tye Sheridan, Tree of Life) and Ellis’ friend known as Neckbone (Jacob Lofland), are wonderfully cast youngers who we will undoubtedly be seeing more of in future films.

Mud also boasts a superior supporting cast that includes Reese Witherspoon as Mud’s long-lost love interest Juniper, Sarah Paulson (American Horror Story, Serenity, Martha Marcy May Marlene) as Ellis’ mother, and Ray McKinnon (Sons of Anarchy, Deadwood, The Blind Side) as Ellis’ father. The price of admission to see Mud in theaters may well be worth it just to see Michael Shannon (Man of Steel, Take Shelter, Boardwalk Empire) in a comedic role as Neckbone’s eccentric but caring father-figure/uncle. The end result: a superb cast and an experienced writer and director have created an extremely well-crafted coming-of-age story.

The only thing missing may be a slight lack of true innovation. This film is executed to near perfection, but it is somewhat of a by-the-numbers coming-of-age story. When I saw Take Shelter at Sundance a couple of years ago, I was amazed at the character development and the individuality with which the character arc and story arc were based. Mud is more accessible, which basically means more commercial, and Jeff Nichols has admitted as much in Q&As. Overall, Mud was one of the top films I saw at Sundance 2013, and if you see it and enjoy it, check out Take Shelter!

—–
In addition to her duties at SAGindie, Ellen Tremiti is also a Contributor for Fanboy Comics, an online conglomerate of geek media, providing its readers with daily reviews, interviews, and podcasts that span the pop culture spectrum. For more interviews, blogs, and reviews by Ellen and the FBC staff, check out the Fanboy Comics website or sign up for the e-newsletter, The Fanboy Scoop, by emailing subscribe@fanboycomics.net.