Filmmaker Interview: SHAWN CHRISTENSEN, writer/director/star of BEFORE I DISAPPEAR 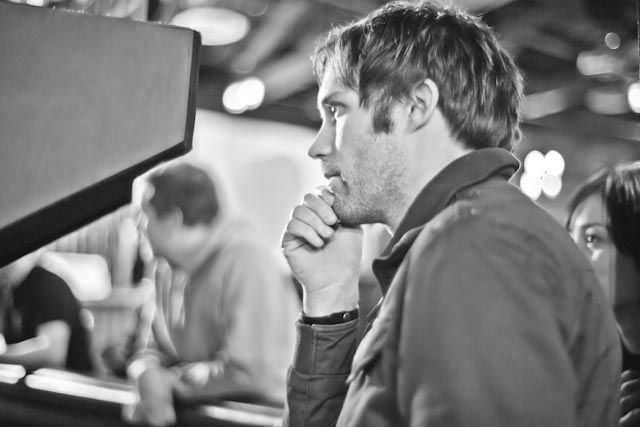 SHAWN CHRISTENSEN knows how to multitask. He started writing screenplays while simultaneously fronting the successful indie rock band stellarstarr*. That move into screenwriting landed Shawn a number of studio writing jobs and eventually a place on The Black List for his thriller Abduction (later rewritten into the Taylor Lautner action flick. More on that experience below). Left a bit scarred by his studio screenwriting experience, Christensen turned to directing in an effort to gain more creative control of his work. His short film Curfew racked up awards at film festivals in Stockholm, Cleveland, Nashville and beyond, ultimately winning the 2013 Academy Award for Best Live Action Short Film.

Now Christensen has adapted Curfew into the feature-length BEFORE I DISAPPEAR, which follows suicidal New Yorker Richie (Christensen) unexpectedly tasked with babysitting his 11-year-old niece Sophia (Fatima Ptacek, also reprising her role from the short). After winning this year’s SXSW Audience Award, Before I Disappear was picked up by IFC Films and will release in select theaters and on VOD on November 28. The film co-stars Emmy Rossum, Ron Perlman, and Paul Wesley.

Shawn was nice enough to tell us a little about the difference between short and feature filmmaking, why he contemplated quitting the movie business, and the weirdness of being referred to as “Academy Award-winner Shawn Christensen.”

COLIN McCORMACK: Sometimes screenwriters get burnt out on a story after multiple drafts or incarnations. What kept you interested and invested in Curfew that made you want to expand it from short to feature? Was there ever a moment where you wanted to take a break from those characters or that story?

SHAWN CHRISTENSEN: Oh yeah, I definitely have needed a break at times. A lot of second-guessing occurred during the writing process. But what kept me interested were a couple of things; 1) The chemistry and relationship between Richie and Sophia made the possibilities endless, and 2) The opportunity to explore more surreal aspects throughout the film. The setup inherently provided me with some cinematic leniency to try things out that wouldn’t occur in a more straight-laced tale.

CM: What prompted the title change from Curfew to Before I Disappear?

SC: Simply put, I wanted each film to have its own life, with no confusion. Feature films get more exposure than short films, and if I kept the same title, it would have buried the short film. For example, if I asked you how you liked Short Term 12, you would assume I was referring to the feature film – but it was also a short film that was quite good and was even shortlisted for the Academy Awards.

CM: What was the storyline or subplot you were most looking forward to adding in the feature version that you had to cut from the short for either timing, budget, or scheduling reasons?

SC: When Richie goes to the music store to awkwardly confront Sophia’s father. It ultimately wasn’t needed in the short, but in the feature, it’s basically the first proactive measure that Richie takes, which was important to his arc.

CM: Curfew had about the most ideal path a short film can take – film festival accolades and an Academy Award – what do you think of the short film world as a whole? Do you think you could have made the jump to feature directing if you hadn’t gotten experience making shorts?

SC: There are more avenues for short films to be seen than ever before, and more filmmakers are having their voices heard in the expanding landscape. There’s just something pure and true about the short film format – you take a single, simple idea, and run with it – no filler. I definitely needed to cut my teeth on short films. There’s really nothing better in terms of learning about narrative, running a set, working with actors, and gauging audience reactions. I needed that confidence. The encouragement from people who watched those films helped me quantify taking the next logical step.

CM: Just to get it out in the open, you won an Oscar. Is it hard to wrap your head around the fact that from here on out, you get the phrase “Academy Award-winner” tagged to your name?

SC: A little bit, yes. It’s especially uncomfortable when it comes to advertising. I understand it from a marketing perspective, but it’s always surreal to see your name next to the word Oscar on a poster.

CM: Regarding the difference between feature filmmaking and short filmmaking, were there any elements of the feature world that were actually easier than making a short?

CM: Tell us a little about directing yourself as an actor. What were the most difficult or awkward parts of wearing both hats?

SC: The acting is kind of the cathartic ‘relaxing time’ for me during the shoot. I spend about 2% of time in front of the camera, and 98% of time rolling with the punches as the Director. Sometimes I’ll only do one take because there isn’t enough time. The awkward thing is when I’m in the editing room and referring to myself in third person – like “He’s not very good in that take, do we have anything else?” Many times the answer is “No.”

CM: W.C. Fields warned filmmakers against working with children. On a low-budget film with a tight schedule, how difficult was it to navigate the waters of having a minor on-set (especially since she is the co-lead of the movie)?

SC: In this case, I stumbled upon an incredible talent in Fatima Ptacek. As a result, I believe that the entire crew kept their game up because of her professionalism. There weren’t too many issues with the limited hours, honestly – the Line Producer did a good job of sparsing her days out. Also, it should be mentioned that she has great parents and they’re very easy to work with and accommodating. I think one of the bigger concerns with working with children stems from dealing with their parents, not so much the kids. We didn’t have those issues [with] Curfew or Before I Disappear.

CM: You were working on expanding Curfew into Before I Disappear before the Oscar nominations came out, correct? Once you were nominated and won, did that raise the stakes with your financiers? Like, “Oh we’re working with an Oscar-winner now, let’s throw in a few more bucks!” Did you personally feel any more pressure to deliver the goods?

SC: I guess there was some pressure. But I couldn’t come at it like I’m trying to compete or ‘top’ the short film. My only mandate was to direct the film and do it to the best of my ability.

CM: Was there a noticeable shift in how you were viewed or treated in the industry following the win? Or does the excitement wear off once the Vanity Fair After-Party is over?

SC: Yes. If only because I felt my career was over after my spec [scripts] were shelved or made into bad movies. In fact, if people didn’t respond to Curfew, I would’ve probably left the film industry altogether – it was really kind of my last ‘hurrah.’ But today, I get meetings now that I never would’ve gotten before.

CM: Do you see yourself as a “New York filmmaker” – would you like it to be part of your filmmaker identity, like Spike Lee or Woody Allen?

SC: I’m not quite sure. I am definitely a proud New Yorker, and I have a romantic notion of my hometown, but I sense that my backdrops will not always be in NYC.

CM: How involved were you in the negotiation process in acquiring a distributor (IFC Films)? Any pointers filmmakers should keep in mind when signing a distribution deal?

SC: I discussed our options, at length, with the other Producers. We were interested in IFC and decided it was the way to go. I can’t really give pointers to other filmmakers, at this stage. It’s definitely new territory for me, and I have limited experience with it, at this time.

CM: The film hits theaters, iTunes, and VOD on the same day. Have you learned anything about VOD or the day-and-date release strategy that you found enlightening or unexpected?

SC: The day-and-date approach is new to me and I don’t know yet what to expect. Some people have told me that the theater audience and the VOD audience are somewhat separate, and that the theater expansion doesn’t conflict with people who will watch the film at home. I know other films have gone this route very successfully and I hope we’ll be one of them.

CM: So you’ve been a graphic designer, a musician, a screenwriter, an actor, and a director. Any other extremely difficult creative endeavors you’ve been looking to try? Pastry chef, maybe?

SC: Perhaps I’m a Jack of all Trades, but Master of Nothing. In that context, I would wager that a pastry chef is most certainly something I could fail at like a champ.

CM: Was traveling on the film festival circuit at all similar to touring with your band?

SC: Interesting question. Yes, I suppose it is a bit similar. I get the same nervousness when my film is about to be screened, as I did when I was about to go out on stage. The main difference is, when they start the film, I can go out and get a whiskey while it’s playing. Whereas in the band, I most certainly would have to be up on that stage for the full 90 minutes.

CM: You’ve written some studio films and have been pretty open about the lengths the execs went to cut you out of the process [during Abduction]. It reminded me of a recent Twitter rant screenwriter Craig Mazin went on against the “wrong” type of development executives, who focus mainly on controlling the writer instead of trusting them. While your experience on Abduction wasn’t great, have you since worked with any “good” studio execs?

SC: There are definitely smart execs out there that I have developed relationships with and would like to work with down the road. The issue for me was, when I was only a screenwriter, the treatment was appalling. When you’re a Director, the attitude changes. I felt that I better start controlling my writing a bit more, or I’ll never have pride in my work.

What’s the first movie you remember seeing in theaters?
The Last Starfighter

What’s your go-to drink order at a bar?
Jameson on the rocks

Recommend a movie you love that most people haven’t heard of.
And Justice For All

Finally, where and when can people see Before I Disappear?
It will be at the IFC Center in NYC starting November 28th, and then in LA on December 5th at NoHo7. I think it expands to New Orleans and Miami after that, and a few other cities. Otherwise, it may just be on your cable provider on November 28th!