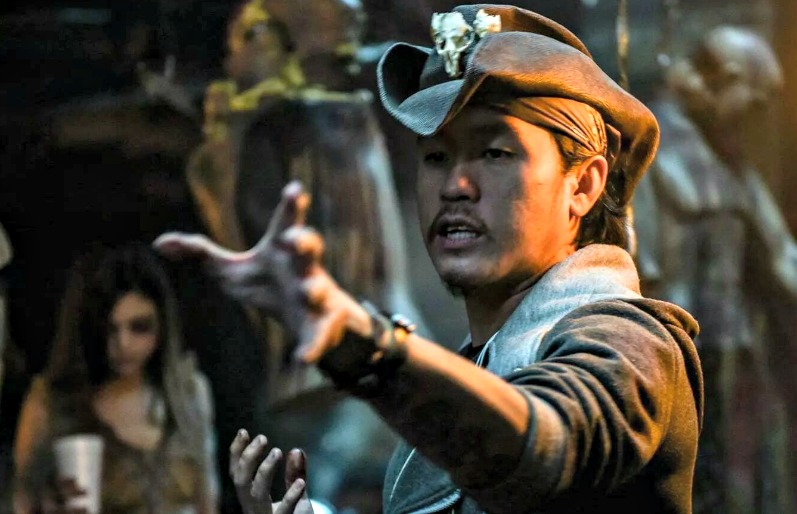 PEARRY TEO‘s 2007 sci-fi thriller The Gene Generation holds special distinction in his filmmaking career: Not only was it his feature directorial debut, but it marked Teo as the first ever Singaporean director to make a Hollywood feature film. With that legacy under his belt, Teo has continued writing, directing, and producing – both in Asia and the United States – including executive producing The Wachowskis’ Cloud Atlas, directing Witchville for the Syfy Network, and co-writing and directing Lionsgate’s Dracula: The Dark Prince. Teo’s newest horror-fantasy once again puts a twist on a classic character in THE CURSE OF SLEEPING BEAUTY.

Based on the Everette Hartsoe comic book (adapted by Teo and Josh Nadler), The Curse of Sleeping Beauty tells the story of Thomas (Ethan Peck), an introverted artist haunted in his dreams by a mysterious beauty (India Eisley) cursed with eternal slumber. When Thomas inherits a decrepit mansion, he begins to discover that the property is tied to a paranormal underworld where the Sleeping Beauty resides. Natalie Hall, James Adam Lim, and Bruce Davison co-star. The Curse of Sleeping Beauty opens in theaters May 13 and on iTunes/VOD on May 17 via XLrator Media. [UPDATE: The film is currently streaming on Prime Video, Vudu, Tubi, and The Roku Channel.]

Pearry Teo was nice enough to speak with us about his new directorial effort, working with first-time filmmakers, and his venture into Virtual Reality filmmaking.

COLIN McCORMACK: You have experience as a writer, director, and producer. What about a potential project makes you decide whether to pursuer one of those roles over the other?

PEARRY TEO: I definitely make very very different decisions on different projects whether I’m the director or the producer. Usually I tend to take projects as a director if I have something very visual to work with. For a producer, I usually take on the project if, you know, maybe it [has] a director that’s something for me to work with [or] I believe it’s a great story that needs to be told and I really want to give a first-time director a shot at doing this. And usually when I’m a producer I tend to make films with first-timers; first-time directors, newer actors. Because it’s a lower risk and I’m trying to put together new talent that I could possibly work with in the future when I’m a director [laughs].

CM: Is there any go-to advice that you often give a new director before they start production?

PT: Yeah… Each director is very different in how they approach [a] film, but I find a lot of first-timers tend to overthink some things and they tend to burn themselves out by the first week. So they’re not only running on fumes by the second or third week, but they’re almost cruising along and they’re not paying attention to important facets of the film, whether it’s tweaking a performance or making sure that your camera language is consistent. Those things are really hard to focus on when you’re running on fumes and burnt out. So I really try to help younger directors pace themselves. I try not to tell them how to do their jobs, because that’s the reason I hired them and I love what they do as a director. But pacing and stamina has always been an issue with first-time directors.

CM: What are some ways that you discover new talent? Do you check out short films or go to festivals? How do you field those directors you want to work with eventually?

PT: Usually – because making movies is really a marriage – when you’re making a feature film you’re not just spending a few weeks shooting a movie, you’re spending a few months in pre-production and possibly even longer in post-production. So first and foremost you’ve got to like that person. I’ve got to want to work with them, they have to have a personality that matches with mine, and that’s the first and foremost important thing. And if I grow with them as friends, if I start believing in them as artists, I will tend to look more into their work and see how they grow in their work and when they’re going to be ready to do something that I’d love for them to do. We have started [new director partnerships] in so many ways. I have met filmmakers at film festivals, but usually those are very few and far between. It’s ironic because a lot of people are going to film festivals to market [their film], but by the end of the film they’re the ones partying and not in the headspace for work at all. So I’m kind of like, Well that’s kind of useless if you’re here to market your film. [Laughs]. If you can’t even talk about your work.

I’ve definitely met filmmakers – surprisingly – on Facebook, where people post their short films and all that. And why that’s so great is because I can be watching a short film and right on top is the guy’s profile I can click on and immediately talk to him. It’s not like Vimeo or YouTube, because how many people even know that YouTube has [private] messaging or if Vimeo has one? Usually you can put it in the comments, but we don’t like doing that because we don’t want to put our [contact] info on there. Seeing stuff on Vimeo is great, but we still have to contact the filmmakers later and it’s usually awkward. But Facebook is so open, I can be watching a short film and think, Wow I really like that. I click on his link, send him a message saying “This is amazing, I would love to see more,” introduce myself, and things like that.

It’s all about accessibility. You have to ask yourself: If you’re going to show your film [on] a certain platform, how easy is it for somebody who watches it to contact you? How easy is it for them to find you after that? If it’s going to be hard, then there’s no point in putting it up on YouTube. And your handle name is “MattMagician” or something like that [laughs], nobody knows who you are if your directing name is “Matt Smith.” How are we going to find you? It’s going to be ridiculous. That proves to be really tough, so again it’s about how quickly [you can] access people. In this day and age where everything is so fast, emails are so fast and all that, once you grab their attention, make it really [easy] for them to contact you before their mind wanders off to the next short film. 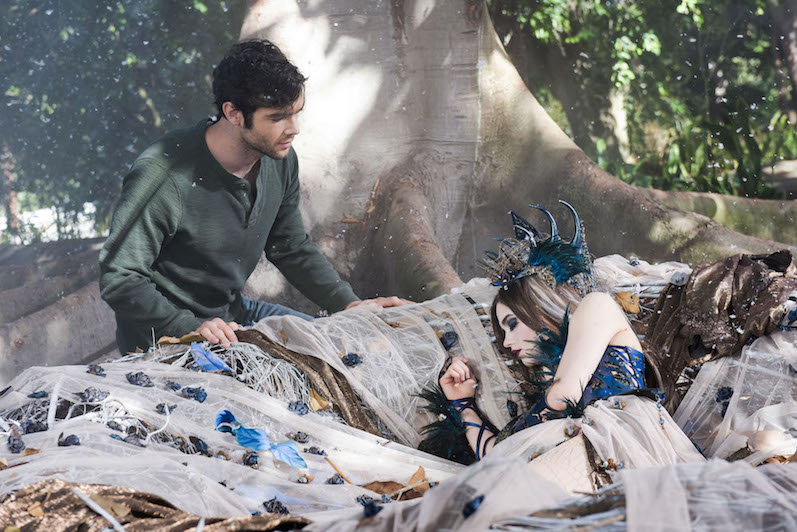 CM: The Curse of Sleeping Beauty is such a visual film with a really powerful aesthetic. You shot that in LA, correct?

CM: How early did you and your production designer start visualizing the film and planning the look of everything?

PT: Well I usually spend about a month by myself first, not only collecting my notebook and putting together my look book and things like that, but I always have to prepare myself as a director. And the two most important things I always spend my time preparing myself [for] is why would people spend their time working on the film? Because in the end, whatever it is, you have people who work for paychecks, but the best crew that you’re going to find are the ones that don’t just know how to make a film, they don’t just know where to make a film, but they know why they are making the film. Those are the most important, most passionate, creative and mind-blowing people in entertainment you’re going to have. But in order to do that, you have to understand the “why” first. Your “why” has to be so strong that your passion becomes contagious. And once I do the why, I’m going to do the how. I’m going to do a look book, I’m going to create my inspirations, [share] my thoughts so people can really understand me [and] nobody is trying to question or second-guess, I wonder if Pearry would like that? That’s going to waste a lot of time. And so by making [your vision] concise and clear, you almost have a Bible by the time the month is done. Then I spend about three weeks with my crew building the world, discussing how we can do things beautifully, and right off the bat it is followed by about 21 days of shooting, and then a month of editing. [Laughs] So back to the room alone.

CM: And you cast some up-and-coming talent in the film like Ethan Peck and India Eisley. When it comes to Eisley specifically, what’s the audition process like for casting a character who has to spend so much time sleeping on-screen?

PT: It’s funny, actually. The casting process, when we find somebody like India, I’m already familiar with the acting, so it’s not like the audition was strictly about that… I always believe there is a certain standard for actors. I either look at somebody as an actor or as somebody who’s training. I never see them as “good” or “great” actors. When you’re an actor, there’s a base [quality] for me, and then everything after that comes from you.

CM: The Curse of Sleeping Beauty has a whole fantasy world built into it. When it comes to special effects, is choosing between CGI and practical effects largely a budget-based decision or do you strictly try to make it as an artistic choice?

PT: Artistic for sure. I’m never big on CGI unless it’s the last resort and it’s story related. I love practical effects, especially when the actors can interact with it. That’s why I love monster suits and insisted on them in Sleeping Beauty. There’s something organic about actors moving in a suit than cannot be replicated by a cluster of computers.

CM: I’ve read that you have been starting to work in the Virtual Reality space. How do you foresee VR being a part of narrative filmmaking in the future? Do you think it might replace a current form of entertainment, or just be an additional storytelling platform?

PT: VR is a very new and exciting way for narrative filmmaking to explore. But I don’t think it will replace current form of entertainment. VR filmmaking and the VR experience is very involved and requires an investment emotionally and technologically to appreciate. It’s not like putting on your favorite movie in the background while you are working or going out on a date together and watching a movie (would be silly to go on a date with headsets strapped to your faces). That said, we cannot ignore VR and see it as a tool for more ways to tell the story. The future is very exciting indeed.

Thanks to Pearry Teo for taking the time to talk to us! For more information on THE CURSE OF SLEEPING BEAUTY, visit the film’s website or on Facebook.