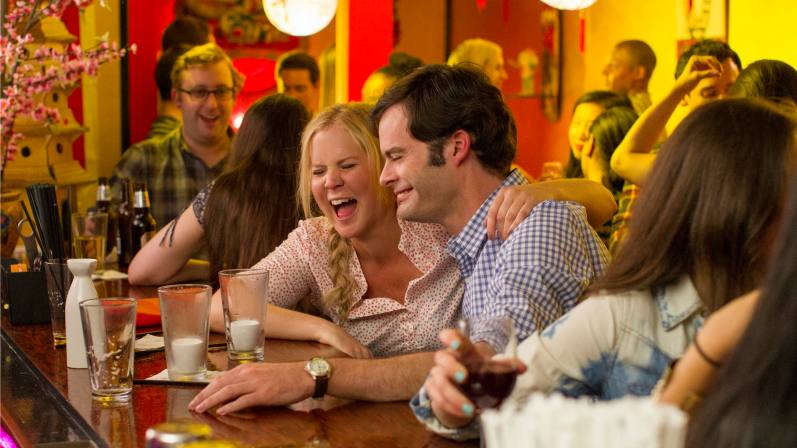 We’re real deep into the Summer Movie Season™, and the SAGindie staff has narrowed down which July movies are worthy of abandoning the sunshine, beaches, and barbecues to sit for two hours in a dark, air conditioned room with screaming children and sticky floors (except you, Arclight Cinemas. You guys are cool). Take a look at the July movies we’re most excited for.

Yeah, Magic Mike XXL cuz, well, I HAVE EYES. ‘Nuff said.
Ant-Man
Mission Impossible: Rogue Nation
But also Lila & Eve and Unexpected because I missed them at Sundance and wanted to see them.

And Trainwreck – (I assume someone just stole Eliza’s home videos).
And honorable mention: Nowitzki: The Perfect Shot (What?!)

There’s only one film worth seeing (Trainwreck) and I don’t have to because that’s my life the end ok.

God help me, but I think I actually want to see an Adam Sandler movie in 2015…? Pixels looks like a combination of Wreck-It Ralph and The Lego Movie, so if that’s actually the case, maybe I don’t have to be so ashamed. Some other comedies I’ll try to carve out time for: Trainwreck, Vacation, and The Stanford Prison Experiment. Okay, so that last one isn’t a comedy (despite the haircuts). Plus, I already saw it at Sundance. It’s super intense, but recommended if you want to get angry and uncomfortable.

Other July films that have my curiosity piqued: The End of the Tour (I am admittedly rusty on my David Foster Wallace knowledge, but I like Jason Segel and Jesse Eisenberg and the ‘90s); Stung (that poster!); and Tangerine (I’ve heard nothing but good things, and am a sucker for movies that take place over one crazy day).

I wish everything in July could be as cool as Tom Cruise, a.k.a. my summer spirit idol; the man does his own stunts and the trailer for Mission Impossible: Rogue Nation already shows him clinging from an airplane as it takes off. After scaling the tallest building in the world, this might sound like a piece of cake, but Cruise has let us all know he was still terrified doing eight takes at 5,000 ft. The man’s definitely crazy but man, Maverick still got it! Did I mention he does his own stunts?! Say what you will, but Scientology is really working for him because he’s ready to meet his maker.

Amy Schumer is a close runner up, because I can’t help but feel like she took some inspiration from me when penning Trainwreck. While it will be really great to see an a-stereotypical female lead, I’m more excited to see LeBron James acting as opposed to traveling. Sorry bout that Finals loss, King James.

And what would July be without, what I hope, becomes an annual tradition of a new Magic Mike film. While early reviews are showing that the sequel can’t live up to its predecessor, this movie does have XXL in the title and that has to count for something.

*The End of Tour is not a movie I’ll be seeing in July because I already have, but you should. I didn’t think Jason Segel had the acting chops to play someone like David Foster Wallace, but he does, and surprisingly well.

WHAT MOVIES ARE YOU LOOKING FORWARD TO SEEING THIS JULY?