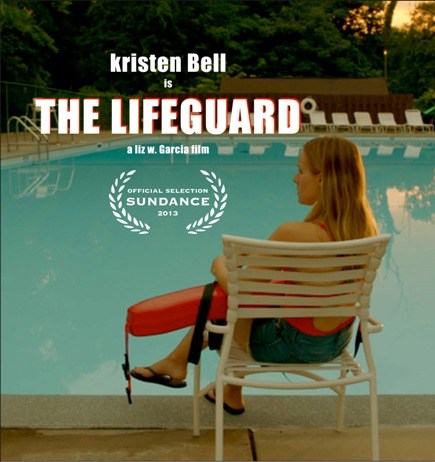 THE LIFEGUARD is written and directed by Liz W. Garcia. Garcia has a background in television where she co-produced for Cold Case and executive produced for Memphis Beat. The Lifeguard is her directorial debut. The film stars Kristen Bell (Forgetting Sarah Marshall, Veronica Mars) as Leigh, a former valedictorian who quits her reporter job in New York City and returns to Connecticut to live with her parents.

Leigh leaves NYC for two reasons: the first has to do with the pressures of her job and her general dissatisfaction with life in New York, and the second has to do with an inappropriate relationship with her boss that is going nowhere. Once Leigh arrives home, she tries to assimilate back into the life she once knew, the life of a teenager. She takes a job as a lifeguard and assumes her parents will support her decision to return home. This assumption causes tension between mother, father, and daughter.

While acting as a lifeguard, Leigh also spends time with old friends and makes new, teenage ones, as well. Her sense of right and wrong gets all mixed up as she tries to forget that she is almost thirty, not almost twenty. Her irresponsibility easily lands her in hot water as a relationship develops between Leigh and a teen, Jason (David Lambert). From Leigh’s perspective, everyone should just chill out, like she has, and not put so much pressure on whatever disillusioned expectations she, or anyone else, once held in their teenage years.

The Lifeguard does pose some interesting questions for twentysomethings on the cusp of adulthood, and Garcia’s style shows promise for future projects, but this film’s biggest shortcomings seem to stem from the original script. The plot twists may be handled decently well, but they are predictable; much of the time, the characters lack believable motivation. One of Leigh’s best friends who is now the principal of their old high school makes dubious decisions that are hard to believe, along with the other adult friends in Leigh’s life. The editing also becomes wearisome by the third or fourth time artsy montages are used to create emotion or a dramatic tone, and the plot is similar to the 2012 Sundance film Hello I Must Be Going. In essence, you’ve probably seen this movie before, more than once. The best thing about this film is Kristen Bell’s performance, so if you are a fan of hers, you may enjoy this one. Otherwise, you could pass on it.

In addition to her duties at SAGIndie, Ellen Tremiti is also a Contributor for Fanboy Comics, an online conglomerate of geek media, providing its readers with daily reviews, interviews, and podcasts that span the pop culture spectrum. For more interviews, blogs, and reviews by Ellen and the FBC staff, check out the Fanboy Comics website or sign up for the e-newsletter, The Fanboy Scoop, by emailing subscribe@fanboycomics.net.