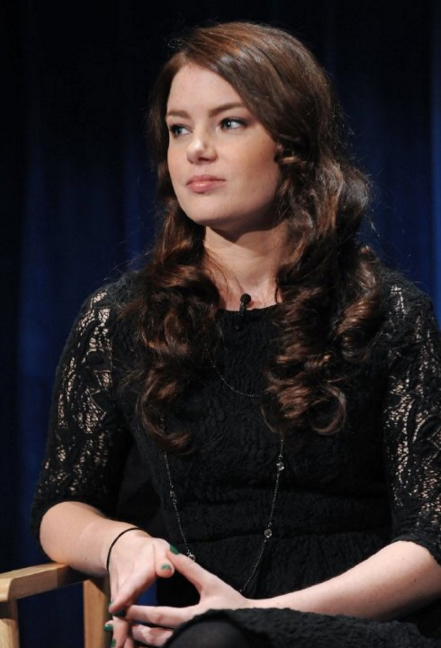 Since earning her M.F.A. in 2008, M. ELIZABETH HUGHES has quickly made a name for herself as a no-nonsense producer who can stretch a budget. Her first feature – and first project out of film school – Herpes Boy (starring Beth Grant, Ahna O’Reilly, and Octavia Spencer) was made on a shoestring budget but garnered several festival awards and received distribution.

M. Elizabeth’s career would progress nicely with Sundance hits We Live in Public (as production manager), Save the Date (as line producer), and Joss Whedon’s Much Ado About Nothing (as line producer). Most recently she co-produced the 2013 SXSW Grand Jury Prize Winner Short Term 12 (in theaters August 23) and produced the hit web series Husbands from Brad Bell and Jane Espenson (season three premieres August 15).

She credits her love of movies and passion for logistics as the main reasons for forging on in such an arguably unstable industry. While it hasn’t always been glamorous, her unwavering passion and persistence has kept her consistently employed since starting out only a handful of years ago. During this time, she has learned a thing or two about making a production work on tight parameters. She’s agreed to share with us her twelve most important tips for independent filmmaking.

1.  Make sure your script is in the right place before you start shooting. It’s costly to shoot scenes you knew were never going to make it in to the movie in the first place.

2.  Do whatever you can do before you start shooting to make your shoot as smooth as possible. Rehearsals, pre-lighting, set dressing ahead of time – this may cost you a little extra in terms of rentals and location fees, but it will save you so much time during your shoot and everyone can focus on making the movie instead of prepping for it.

3.  Start your guild (SAG-AFTRA, WGA, DGA) paperwork as soon as possible. Research all the different types of agreements and the ramifications for your project. Turn in your paperwork as quickly as possible in order to stay right with the guilds.

4.  Always have a contingency – you will need it. I try my best to set aside 10% of the budget for this. Something will always come up, I promise. If you are a miracle worker and manage to keep all of it, devote that money to post production.

5.  Cut corners wisely. You want to put as much money as possible on the screen, but you will need to spend money on things that don’t directly correlate to production value.  Craft Services and catering are two of these areas that should not be skimped. Good food makes people happy and keeps them working.

6.  Always try to hire people that you have worked with previously or are recommendations of people you know and trust. They will be less likely to screw you over since they are making their friend look bad too.

7.  When the budget is small and everyone is working for the passion of the project, create a rate structure based on tiers. All department heads make X amount, all 2nds make Y amount, etc. Everyone is more likely to be happy about their rates knowing that everyone is making the same amount. If you agree to this, stick to it. People will talk.

8. On a low budget production, the logistical circumstances of your locations can end up being one of the largest determining factors in the success of the production. Your friend may let you film in their apartment for free, but is the location right for the project? Will you need to spend more money to dress it to fit the story?  Consider every variable… cost and convenience of parking for both crew and production vehicles, distance and relative hostility of neighbors and neighboring businesses, available area for staging equipment.

9.  When you’re picking a camera format, consider all the secondary cost ramifications such as data storage, data processing, online costs, etc. Also make sure your DIT (Digital Imaging Technician) knows what he or she is doing – lost footage is very costly to replace.

10.  Free help is almost always not worth it. It’s better to pay a talented sound person their day rate than to have a friend do it for free and not record the sound.

11.  Make sure you save and keep track of all your paperwork. I like to scan everything and have a digital backup on Dropbox in addition to all of the hard copies.

12. Just remember that you’re making movies, not curing cancer. It’s important, but it’s not worth stressing out to the point of not sleeping, eating, etc. It’s a movie, have fun!