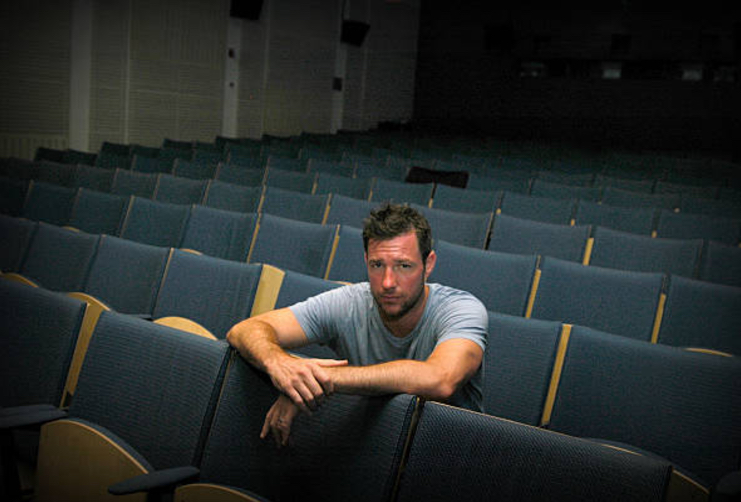 It’s been eleven years since ED BURNS burst onto the scene with his breakout indie hit The Brothers McMullen. His career since has had its share of ups and downs, but Burns keeps churning out films in his inimitable, amiable style. We recently sat down with the veteran indie filmmaker to talk about his new film THE GROOMSMEN, life after McMullen, and the state of the independent film business. 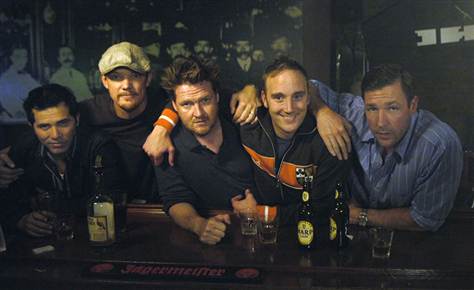 SAGINDIE: Can you talk a little bit about assembling the cast for The Groomsmen? What was that process like?

EDWARD BURNS: Donal Logue I knew before. It’s interesting, because I wrote two versions of the script, one a few years ago that was more of a broad comedy, and then when I got married my wife said that I should write the honest version of the script, about the reality of it. I don’t know if I thought of Donal before, until the middle of writing, when I started to change to writing it for Donal. I wrote my role with another actor in mind, kind of a bigger name. I was going to play Des, who I loosely based on my dad, since I thought it would be cool to play him. But when the two guys I had in mind for Pauly were unavailable, and since we were getting short on time, I jumped in to play Pauly. When Matthew Lillard read the script he loved it, but he thought we would want him for Cousin Mike. I thought it would better to go the other way with it, to have him do something he hadn’t done before, which was kind of what everybody did on this. John Leguizamo playing T.C., and Jay Mohr playing still a funny character, but not an acerbic, aggressive guy like Bob Sugar, and then Matty playing the sage. My process is, I have a great casting director, and we do recon work, to find out who’s an asshole and who isn’t when you look for actors. When you make a movie for 3 million dollars and shoot in 25 days, you have to have people who are willing to not have a trailer. There are no first class accommodations, you might have to be in and out of the makeup trailer in 10 minutes, we might ask you to wear your own clothes, we might change the script at the last minute, you may be asked to shoot 8 pages in a day. There are some guys, that’s not going to fly with. If you’re shooting 25 days, and you lose an hour because someone’s refusing to come out of his trailer, you’re dead. Everything I heard about these guys turned out to be true. All super enthusiastic guys who hung out on set, and that’s how we got some of the scenes. The stuff with Jay and his Dad, I think two scenes were scripted, but like the scene with the heavy bag, that was just the two of them improvising and I just said “Roll the fucking camera, this is great.” Some actors are just not cool with that.

How about the dialogue? How much is from your own experience?

EB: I pull some of it from things that friends have said. I’m always sort of jotting down a classic line I hear. That’s kind of how ideas are born – that kind of thing might actually trigger the screenplay itself. The other advantage to having a cast like this is- After Private Ryan I changed the way I worked with actors. Spielberg is a guy who gives you no direction, and I asked him why. He said “I’ll give you guys four or five takes to figure it out on your own. If by then you haven’t, I’ll step in and kind of guide you to where you need to be.” That’s kind of the policy that I’ve adapted, and it works great with ensemble acting. You want everyone to feel comfortable, and sometimes you won’t get it on your first or second take. But when you do that, there’s such a comfort level, and I allow a bit of improv-ing to go on, and once guys start to feel comfortable going off the page, then you start to get some real magic. I give a lot of credit to Jay, because a lot of that stuff coming out his mouth is Jay’s funny lines. And you have to be comfortable enough as a screenwriter and director to allow that to happen, to say to an actor “You win, your line is better.” We shoot in moving masters, so you don’t have to worry about matching stuff up later. It’s like the scene with the kids playing guitar. They knew they had to play the song, but a lot of the dialogue was just Matty being their dad.

Do you think that this kind of a small town America is disappearing?

EB: It’s funny. Donal had an interesting look at it. I always thought of it as my reaction to my suburban experience, a reaction to Todd Solondz’s take on it, or American Beauty. I never saw the suburbs as that destructive. Donal sees it a love letter to the swan song of the small American town. Those kind of relationships between people who live across from each other, who might leave their doors unlocked, who have those friendships. I didn’t see it that way at first, but Donal noticed that. I don’t know, I live in Manhattan now, so this is a nostalgic look at the life I left behind. If not for Brothers McMullen, I’d probably be a dad in the suburbs, probably a cop or something.

You’ve been doing independent film for a while now. How has it changed in the last ten or eleven years?

EB: It’s interesting how it’s changed. It’s harder to get movies made than it’s ever been. I can’t believe that after eleven years, I say “Hey, I was in Private Ryan, you can’t give me 3 million dollars to make this movie?” But it’s brutal. It’s never been so hard. If I didn’t get Brittany Murphy to be in this movie, I don’t know if I would’ve gotten my financing. We’re being released on 3 screens. You will not see a television commercial for this movie. There will be a small ad in the New York Times. This is one of those films that needs all the My Big Fat Greek Wedding love you can generate, just in order to ensure that it gets to the arthouse theater in Boston, forget about if you live in St. Louis, who knows if it will ever make it there. The fact that that is the reality of specialized film today, that if this was Saw 3, or a goofy teen comedy, or any of the other genres that the specialized film companies are making now, you’d get out there. That’s part of the problem, that the Searchlights and the Focus Features aren’t doing these films anymore. Or if they are, they’re doing one, where they used to put out ten. When I came up I benefited from Clerks, Metropolitan, Slacker, El Mariachi. Those were films from complete unknowns, tiny little 16mm films that came out and people went to see them. What’s the last 16mm, tiny, no name cast film that came out? The fact we can’t think of any – what, Raising Victor Vargas and that’s four years old already? That part of independent film has died as far as theatrical release. Maybe one will sneak through periodically, like Primer, which was a pretty cool movie. Maybe the internet will save no-budget indie cinema, but I don’t really know.

Do you think you would have had a different experience if you had stuck with the broad comedy take you initially had on this film?

EB: That’s the decision I make every time I sit down to write a script. I could easily have done a very different version of the script, and then gone to the studios and tried to get one of the names who get movies made, I could’ve have filled the movie with those guys and got $25 million dollars. But then the studio would say John Leguizamo’s character should not be gay, Donal’s got too weird of a problem, let’s just make it that he’s upset about something, and can we make it funny. And you’d have a nice broad comedic piece, like Wedding Crashers. Look, I loved Wedding Crashers, that movie’s great. Meet the Parents is one of the funniest movies I’ve ever seen. I mean those guys are making those movies, but I fell in love with Woody Allen and Truffaut. I did not fall in love with Mel Brooks. And so I’m trying to do a different thing, and if that means it has to be tougher, that that’s what it has to be. To answer your question, it’s gotten tougher over the last ten years. Given that all these guys who started their careers then, I mean would we have Tarantino today? Would Reservoir Dogs gotten released today? I wonder.

What has your career as an actor for hire outside of your movies done for your ability to find financing?

EB: You know, the only reason I did it was to help, and certainly post-Ryan and 15 Minutes it was easier, but I’ve made a couple of clunkers, so that certainly hasn’t helped. And, once I had my kid, I was sorta like I don’t love going off to Vancouver to act, or God forbid, Prague for four months, so I’m gonna walk away from that for awhile. That’s why I made these little experimental films, to counteract how difficult it was to make these other films. I made a film, Looking for Kitty, for $200,000, and then just did a film called Purple Violets, as a way to stay in New York, and shun my acting career. But now I’m gonna go do a horror movie for Warner Brothers in the fall. You have to do certain films to help the other side of your career. The Cassavetes model is the model I’ve always spoken of, and it can be done.

You made The Brothers McMullen for $20,000. If you knew then you’d be making movies for $3 million, would you feel good about that, or would you hope to be at a higher budget level?

EB: No, to both questions. If I knew I was making a movie for $3 million by choice, I wouldn’t be surprised. Sidewalks of New York I made for a million, by choice. At that time, during the ’90s indie thing, I knew if I shot it for a million, I’d get to own more of it. Six years later, the landscape has changed, and yes, I’m very disappointed that’s all I can get. But I’m also a realist, and I know I’ve chosen to make a certain kind of movie, and not to collaborate with the studios, and that’s the downside of that. The three screens thing is devastating. You used to be able to get screens at the multi-plexes. I remember the big story with McMullen was that we bumped Waterworld out of Sony Lincoln Plaza. That would not go on today. No way.

Are you hoping for bigger things for the DVD?

EB: The DVD will be a whole other thing. I mean, the cover art is Brittany Murphy in a wedding dress. Some mom at a Wal-Mart in Minnesota is going to buy that. But I didn’t start to make movies for home video, the dream is showing something in a theater.

The Groomsmen in now playing in limited release in New York and Los Angeles.

[UPDATE: The Groomsmen is streaming on Hoopla.]
——