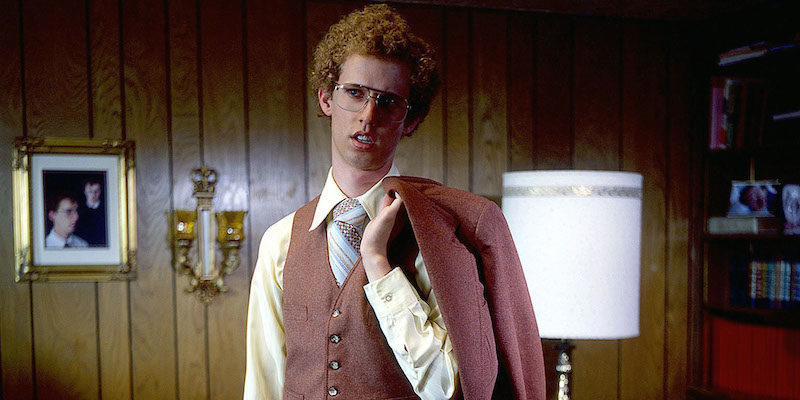 Sure, studios know how to make blockbusters. It’s a simple enough recipe; take a best-selling novel and attach Tom Hanks and Ridley Scott, add a couple car chases, and a few hundred million dollars and there you have it. Done deal. But one recipe that the studios have never been able to crack is the off­beat indie comedy. When BYU students Jared Hess and his buddy JON HEDER set out to make NAPOLEON DYNAMITE, they had only one goal in mind: Make the most bizarre, funny and quirky story possible. They succeeded. The film stars newcomer Jon Heder as Napoleon, Jon Gries (The Rundown, Real Genius) as his pathetic door-to-door salesman Uncle Rico, and Tina Majorino (Waterworld) as Deb, Napoleon’s super shy girlfriend.

SAGINDIE: How did this film come together?

JON HEDER: I met Jared Hess, the writer/director of Napoleon Dynamite in college at BYU. We had taken a few classes and done a few projects together and he said, “Hey wanna do this film?” I had acted in a few short projects and he thought I could play a dorky guy. We actually made a short film called Peluca, which is what Napoleon Dynamite is based on. It went over so well Jared decided to make a feature length film.

How much of the film was scripted and how much room did you have to improvise?

JH: Most of it was scripted. Sometimes I’d throw in an extra word or something, but not too much.

This isn’t just your ordinary mom and pop production. You have some actors with impressive credits. How did you get them to do it?

JH: Jory Weitz was our casting director and he was the one who rounded them all up. He held auditions in L.A. Most of the seasoned actors weren’t huge but they had done stuff. He gave them the script, which they all loved, and that’s how we got them. It was really cool, getting actors like John Gries who knew that they weren’t going to get paid a lot but they loved the script so much that they did it anyway.

Where did the name Napoleon Dynamite come from?

JH: Jared had met this old Italian guy in Chicago who said his name was Napoleon Dynamite. Jared thought that was a really cool name, he wrote it down and said that’s what he would call his first film. It sounds cool and what better name for this kid who’s nothing in Idaho? It’s an explosive name!

How many days did you have to shoot the film?

Where did the money come from? Did the distributor help you complete it?

JH: All the money came from private investors. Jeremy Coon, who was the film’s producer, also edited the film. He was working on a rough cut and he thought he’d try to get it into Sundance and amazingly it got in. And then we got picked up by a distributor.

You shot on location in Preston, Idaho. Where did the crew come from?

JH: Most of the crew were either BYU graduates or still in school.

Did you do the opening title sequence?

JH: Aaron Ruell, who plays Kip, actually came up with that.

Kip is a non-­actor and has several crew credits. How did he become such a pivotal character?

JH: Aaron and I were the only non-­actor types cast in the film. Aaron was Jared’s best friend at BYU and he’s a director/writer in his own right. He does very serious dramatic/psychological type films and quite different than the character of Kip. Jared really wanted him for the role and he said he’d help out.

You’ve added an extra ending for the wide release. When did you shoot that?

JH: Fox Searchlight said, Do you think this would be a good idea and we said, “Why not?” Jared wrote it up real fast and we went back to Preston to shoot it.

Speaking of Preston, how did that become Napoleon’s hometown?

JH: Jared Hess, who wrote and directed the film, grew up there. He moved around a lot when he was a kid but Preston’s where he went to high school. His family spent a lot of time there and the story grew out of his experiences and his brothers growing up.

The film feels a lot like John Hughes’ early work. Was that one of the filmmaker’s inspirations?

JH: Jared is really a Wes Anderson fan. Obviously there is a lot borrowed from his characterization. And definitely the Coen Brothers, we were all huge fans of their work. Some people have said John Hughes but I never thought of it like that before. I guess it’s because the story takes place in high school. Jared really loves old ’80s crusty teenage films. One of his favorite films is Rad with Talia Shire.

The film is a teen film with no real sex or language. Was that intentional on the part of the filmmaker?

JH: I wouldn’t say it was intentional but it is very much where Jared comes from. His high school life was very PG-rated. It really comes out of how these characters were and how he himself was raised. He didn’t want this film to be heavy at all, he wanted to create something that all audiences could enjoy.

One of the funniest sequences in the film is the bike jump gag. Did you ever hurt yourself doing that?

JH: We did that in about four takes. It wasn’t that bad, I mean, I never hurt myself. Everyone on the set was laughing and thinking that must have been so painful but it didn’t hurt. It was the way I positioned myself that kept me from racking my pack at all.

Fox Searchlight seems to have really backed this film. Are you surprised by the response?

JH: Not so much surprised as excited. We always felt it would be great if someone bought it and we could get it released. And when Fox bought it I had originally heard it was going to be a limited release. And that made sense, it was a small movie and there were no big name actors in it. And that’s what they did; the initial release was June 11, and it opened in six cities. And each week it would open in a few more and that was the plan. And on July 23 we had our full release on 1200 screens.

What’s next for you and Jared?

Any chance of a sequel?

JH: I don’t think there will be a Napoleon Dynamite Part 2. There was talk for a while about maybe doing a television series, but as of now there is nothing. I think they may feel it’s overkill or too much or something. The film is really starting to catch fire so I guess we’ll see.

And what are you up to these days?

JH: I’ve since moved down to L.A. and have started to work on acting, taking classes. I actually graduated from BYU in animation. I’d like to continue doing animation and acting.

Napoleon Dynamite has definitely beat the odds and put Preston, Idaho on the map! Check it out in your local theater now.