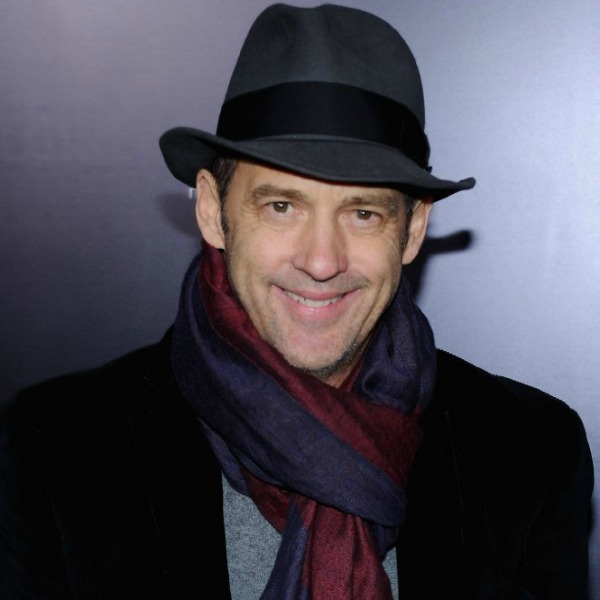 Many actors would kill to land just one iconic role that gives them that people-calling-you-your-character-name-on-the-street level of recognizability. ANTHONY EDWARDS, however, has at least three of those roles: There’s Gilbert from Revenge of the Nerds; Goose from Top Gun; and of course Dr. Mark Greene, his Golden Globe and SAG Award-winning role from eight seasons on ER. In addition to parts in memorable films such as Fast Times at Ridgemont High, The Sure Thing, The Client, and Zodiac, Edwards’ acting resume has been pretty stacked.

But beginning back in his ER days, Edwards has also branched out into directing, and his newest directorial effort is the ’90s-set dark comedy feature MY DEAD BOYFRIEND. Heather Graham stars as aimless, unemployed Mary, who comes home to find her deadbeat boyfriend Primo (John Corbett) actually dead. But as she processes this discovery and tries to make sense of her future, she meets more and more people with their own Primo story, and she starts to wonder how well she really knew the guy. Katherine Moennig, Scott Michael Foster, Griffin Dunne, and Gina Gershon co-star in the film, which hits select theaters and VOD/Digital HD on November 4, courtesy of Momentum Pictures and Orion Releasing. [UPDATE: My Dead Boyfriend is now available to stream on Tubi.]

We had a chance to speak with Anthony Edwards about his acting work, his new gig as director, and how the industry has changed since he began his career.

COLIN McCORMACK: The screenplay for My Dead Boyfriend was written by a fellow actor/filmmaker, Billy Morrisette. How did you come on board as director?

ANTHONY EDWARDS: Billy and [ER actress/Morrisette’s then-wife] Maura Tierney had it years ago- the book. They had found the Arthur Nersesian book [Dogrun] and they did the adaptation then. And they brought it to me with the prospect of directing back in 2001. Long time ago. And I ended up falling in love with it and we tried to get it made then, but I was still on ER and so was Maura… And Billy was always attached as the writer and did I think ten different versions of it. We settled back into the original version, setting it in the [time period] of the book. And making the movie for very little money we thought, Do we make it a period piece? But having it set in 1999 was important for the structure and the kind of McGuffin of the movie – the answering machines and no cell phones, barely any internet. It was really a departure that I held onto because I loved it. And then the rights came up [after] ten years and it was like, “Billy, we gotta do it now!” [Laughs] And we got it together and we shot it three years ago.

CM: As an actor you’ve worked with a variety of iconic directors, ranging from David Fincher to Tony Scott to Amy Heckerling to Rob Reiner. Were there any specific directing qualities that you took note of or brought into your own directing style? Is it kind of a general osmosis with a little bit of everyone you’ve worked with?

CM: You worked with John Huston as well, but he was a writer-producer [on the film Mr. North]?

AE: He produced, and yeah he wrote the screenplay. He’s actually someone I quote a lot. He said, “If you cast it well, 80% of your job as a director is done.” I think that’s really true. You can’t say enough about how actors really bring films to life. 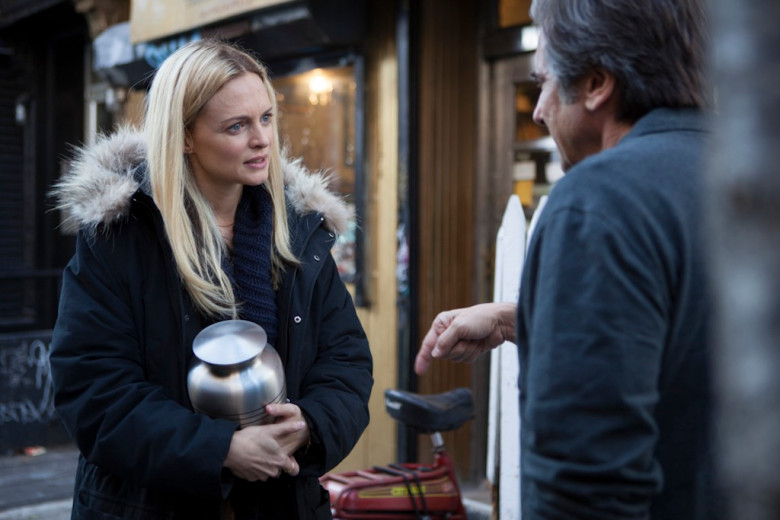 CM: When you’re casting, is it fun or slightly less nerve-wracking for you being on the other side of an audition?

AE: I find it fun because there are surprises. Actors come in and read something and you see it in a different way, and that’s exciting. I also think enthusiasm means a lot. And when an actor really wants to play a role, that’s important – you don’t want to have to try and convince somebody they’re right for it [laughs]. I think the Sue Watt role [in My Dead Boyfriend], that role was a tough one to cast. And Martha Millan is an actress who came in with her own version of it that I just loved. And she really wanted to play that role.

CM: This is a comedy that has some darker elements too. Do you approach comedy directing differently than [dramas], like you did on episodes of ER, for example?

AE: No, I always try to come at everything from some truthful place. I think the process of comedy and dramatic acting is the same, it’s just the results are different because of the dialogue and the situations. But there are very few dramas that don’t have laughs in them and there are very few comedies that don’t have a real truth to them, when they work. I don’t think you can differentiate and say, Let’s do comic directing, [but] you look for different things. You look for things that will make you laugh.

CM: With the animated flourishes in the film, was that something that was written into the script or from the novel, or did you bring that on as director?

AE: It was written into the script. It was a way to show Mary and her imagination and the kind of eclectic-ness of it. It was an original idea, and I think it’s intentionally not easily defined. It’s an element of who she is. We’re spending this hour-and-a-half with this woman and her brain and the world and how she sees it.

CM: You also have credits as a producer, including Emmy-winning TV movies Temple Grandin and My Louisiana Sky, and [Sundance cult hit] Die, Mommie, Die! How did you come onto those projects as a producer?

AE: It’s all through the material. Temple Grandin was a script that we developed when I had a production office. It starts with a script and you get attached to projects, either you have a role in it as director and that would be one thing, or maybe the role is an actor, but other times it’s really just to produce and sort of bring all the people together. That’s what those projects were and how I came at them. The material dictates [how] you can help the film.

CM: And it does seem like in your acting roles as well as the films you produced, you cast a wide net, you don’t stick to one genre. Is that always interesting to you, to try different types of projects, different tones, different genres?

AE: Yeah, I think that’s a natural [thing] that just comes from being an actor. As an actor you train in all different worlds of drama and comedy. And maybe that’s who I am as a person, I don’t only love a certain genre of film either. It goes back to what hits you for whatever reason, and that will dictate what is next. I definitely have been doing more [dramatic TV] episodes as an actor, and I would really love to do a comedy now as an actor. So maybe that’s just a natural reaction too.

CM: One of your films that has become somewhat of a cult classic, Miracle Mile, was nominated for the Sundance Grand Jury Prize in 1989 [a breakout year for the festival, when Sex, Lies, and Videotape, Heathers, True Love, and Powwow Highway all hit big]. Did you go to Sundance with the film that year?

AE: I didn’t… Oh wait, no I did! Yeah, I did. I’m sorry, yeah I remember now too ‘cause in the middle of the screening a siren went off and it interrupted [laughs]. But that’s a good example– there’s a guy [Miracle Mile writer/director Steve De Jarnatt] who wrote completely from his heart and stuck with the movie. He’s written a lot of other things, but really his persistence with that movie is part of the charm of it.

CM: Has there been a noticeable shift in the film world – specifically independent film – that you’ve seen since going to Sundance in ‘89 and making an indie film in 2013 when you shot My Dead Boyfriend?

AE: Yeah, I just think that the ability to make really high-quality films cheaper is pretty amazing. You couldn’t [before]. If you need it to sound right, what you can do visually, [shooting] digitally is incredible. And it really puts the onus back on the writing, and that’s a good place to be. If there’s a good story to be told, you’re not limited just because you can’t afford to do it. And there are obviously great big-budget [films] and that world too, but the independent world seems like hopefully more films will be made in the model of how [My Dead Boyfriend] is being released. It’ll be accessible for people to make movies at this budget level because of Video On Demand, and this kind of release will get you your money back with lucrative and more interesting kinds of movies.

CM: Do you tend to keep tabs on the market and what films are doing well?

AE: I’m actually not. The thing that interests me is being on that set with those actors, or in the edit. The marketing of it is so up to the gods in a way. I mean, I want to promote [the film] and I want people to see it, but I don’t want to judge for myself the experience because it made money or not.

CM: Do you see yourself balancing acting with more directing in the near future, or are you focusing on one or the other for the time being?

AE: I took kind of a big break after ER and didn’t do anything, so [now] is when I’m kind of going back into all different kinds of work. I would be very happy to keep directing, and usually what happens is when you’re looking for something, something else pops up. So probably while I’m pursuing directing, some great acting job will come up, and vice versa. So you just have to stay open. That’s the important thing. 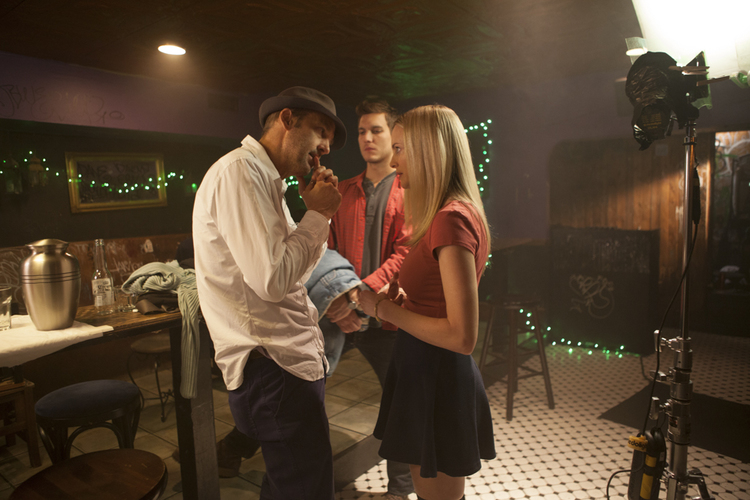 A big thank you to Anthony for speaking with us! To learn more about MY DEAD BOYFRIEND, visit the film’s website.

This interview has been edited and condensed for clarity.