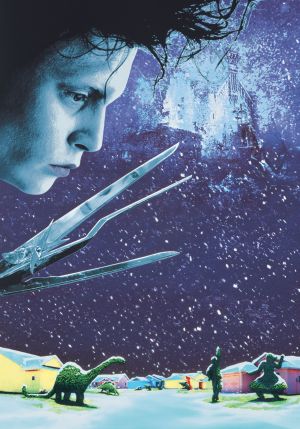 10.) Reindeer Games: A guilty-pleasure holiday movie. Need I say more? There’s a bit of a convoluted plot mixed into this sensual thriller, but, honestly, who cares? Bundle up under the covers and check out the acting talents of Ben Affleck and Charlize Theron this holiday season.

9.) Die Hard 2: Christmas Eve + an airport + a blizzard + terrorists who have taken control of said airport’s communication system X Bruce Willis = an action-packed holiday film with lots of thrills and holiday spirit! Don’t forget the fight scenes on a moving airplane wing and, of course, an explosive, fiery finish to cap off this second enjoyable installment in the Die Hard series.

8.) Little Women: This movie (in all its many renditions) may not immediately come to mind as a holiday film, since it moves through all seasons. The 1994 version stars Winona Ryder, Gabriel Byrne, Kirsten Dunst, Claire Danes, and (don’t forget!) Christian Bale as the March sisters’ male counterpart. Director Gillian Armstrong makes sure to summon the holiday spirit with caroling, snow-filled Concord, Mass, and, of course, the life-changing frozen pond scene. Little Women’s themes of love and forgiveness will go along nicely with your cup of hot chocolate and holiday cheer.

7.) Hot Tub Time Machine: This ridiculous romp through snow, time, and space stars John Cusack, Rob Corddry, Clark Duke, and Craig Robinson. The film is exactly what it sounds like: a time machine at a ski resort sends a group of friends back to 1986 where they re-live a very important night in their lives. Hot Tub Time Machine is a great film to accompany a ski lodge trip, or to help you relive the 1980s in all its color-blocking glory.

6.) The Ref: If family dysfunction and the holidays grate on your nerves, then this comedy will really speak to you. Denis Leary stars as Gus, a petty burglar who takes a dysfunctional family hostage on Christmas Eve. Much to his chagrin, Gus is forced to mediate the family’s problems.  Kevin Spacey and Christine Baranski round out the dysfunctional family cast in this unexpected holiday film.

5.) Trading Places: Dan Aykroyd and Eddie Murphy give thoroughly enjoyable performances in this comedy that garnered a Golden Globe nomination for Best Motion Picture-Musical or Comedy. In case it’s been awhile: an upper class commodities broker and a street hustler have their fortunes reversed by billionaires who decide to have a little fun with a bet.

4.) Scrooged: Tired of Charles Dickens’ A Christmas Carol? Granted, there may be no such thing as growing tired of A Christmas Carol; however, Scrooged puts a comedic spin on this classic tale, which makes this film a perfect addition to your holiday watch list. Bill Murray plays Francis Xavier “Frank” Cross, a soul-less television executive, who chose his career over love many years ago. Things get weird when Cross agrees to air a Christmas Eve broadcast of A Christmas Carol. Strangely, ghosts from his past start coming back to haunt him…

3.) Gremlins: We can point fingers as to who’s to blame, father Randall Peltzer for purchasing the little monster for his son as an ill-conceived Christmas present, or his son Billy Peltzer for breaking one of three simple rules while caring for the Mogwai. Either way, this black comedy is a classic creature feature and definitely an offbeat holiday classic.

2.) Edward Scissorhands: A friend of mine recently admitted to me that she has met resistance when trying to proclaim Edward Scissorhands as one of her favorite holiday movies. The film begins and ends during the holidays, and it is filled with whimsy and heart, two staples of the holiday season. Not only that, but it is a truly inventive film that demands a yearly re-watching.

1.) Die Hard: The original Die Hard takes the number one spot, hands down, as it is one of my favorite movies. Don’t let the lack of snow fool you, this movie is one-hundred-percent holiday film. The movie begins simply enough: New York cop John McClane lands in LA to visit his estranged wife and their two children for Christmas. He meets up with his wife at her work holiday party, an event taking place at the Nakatomi Plaza, an LA sky scraper.  His strained meeting with his wife, as well as the holiday celebration, is interrupted when Hans Gruber and his armed cohorts take the party-goers hostage. Alan Rickman plays Gruber over a decade before he took on the role of Harry Potter’s Severus Snape, and Rickman gives a wonderfully memorable performance as Die Hard’s ruthless and conniving villain. Gruber portrays himself to police as a terrorist, but things are not as they seem. He has his entire plan mapped out, step-by-step, and he is far ahead of the police. In fact, the only thorn in his side is the one party-goer who managed to slip away and who is now taking out his men, one-by-one. Die Hard is a smart, classic action movie with holiday spirit and a lot of heart.  I say it’s a must-see holiday movie!