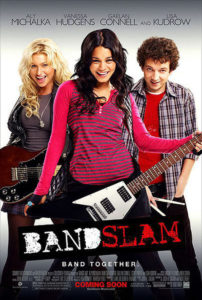 Nikki Finke has posted an insightful insider account of a very real possibility behind the embarrassing gross of Walden Media’s BANDSLAM. As I am very close with a handful of people who worked on the film, I have had to opportunity to see it twice in previews, and I can assure you, it’s smarter than your average cringe inducing, placating drivel that something like Disney churns out consistently. I have heard a lot about the advertising, about how it appeared to be another film compromised of the aforementioned descriptors.

Honestly, I haven’t even seen any advertising for Bandslam at all, but have heard enough about it to surmise that someone decided it was in the film’s best interest to go the lazy route and now we have a great film that never stood a chance; dressed it up in High School Musical clothes, when it should have been out in something closer to what School of Rock was wearing.

Check out the article HERE.