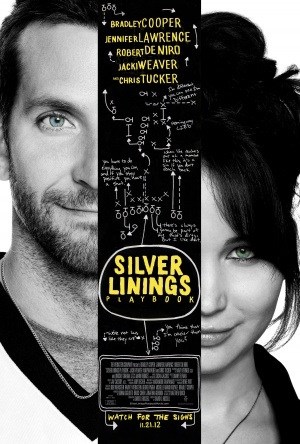 SILVER LININGS PLAYBOOK is a heartfelt drama based on the novel of the same name by Matthew Quick. The screenplay was adapted by David O. Russell (Three Kings, The Fighter), who also directed the film. Bradley Cooper stars as Pat Solitano, a man recently released from a mental health institution. As he assimilates into a regular routine on the outside, he moves back in with his parents, Pat Solitano, Sr. (Robert De Niro) and Dolores Solitano (Jacki Weaver, Animal Kingdom, The Five Year Engagement).

A stipulation of the facility’s release of Solitano requires regular visitation with a psychiatrist and mandatory medication. Solitano was previously undiagnosed as bipolar, and he is now dealing with his mental illness, as well as the repercussions of an offense he committed months prior, which landed him in the facility to begin with. While dealing with his mental health issues and his past, he tries to cling to the positive. But, his outlook is mixed with desperation. His wife has a restraining order against him, and he makes it his mission to win her back.

As his plan takes off with mixed results, he deals with the daily interference of his father, a man with his own challenges, including Obsessive Compulsive Disorder. Solitano also reconnects with his good friend (John Ortiz, American Gangster, Public Enemies). His friend convinces Solitano to come over for dinner with him and his wife, Veronica (Julia Stiles, The Bourne Ultimatum, 10 Things I Hate About You). To Solitano’s surprise, Veronica invites her widowed sister Tiffany (Jennifer Lawrence, Winter’s Bone, The Hunger Games). After that initial meeting, Tiffany, a lonely young woman with problems of her own, attempts, in her own way, to connect with Solitano.

Tiffany and Solitano skirt around real friendship and, instead, form a sort of tortured bond that each participant uses to his or her own advantage. Solitano uses his relationship with Tiffany to get to his ex-wife, as Tiffany and her sister are friendly with her. Tiffany, however, uses that leverage to force Solitano to help her with a couples dance competition. Both characters end up outside their comfort zone as their relationship develops and intensifies.

Cooper handles the devastating highs and lows of Solitano’s bipolar disorder with impressive realism and clarity. The family dysfunction in Silver Linings Playbook is handled with the kind of delicacy and realism that is indicative of a well-crafted drama. Even though the relationship between Tiffany and Solitano is central to the story, Russell spends a good amount of time showing the nuances of the Solitano family dynamic. Cooper, Lawrence, De Niro, Weaver, and Shea Whigham, who plays Solitano’s successful brother, all give outstanding performances. Couple that with a very entertaining supporting cast that includes Chris Tucker, and Silver Linings Playbook hits just the right note. Its tone is similar to Little Miss Sunshine and has the potential to be a similar breakout film.

Silver Linings Playbook has a release date of November 21st.