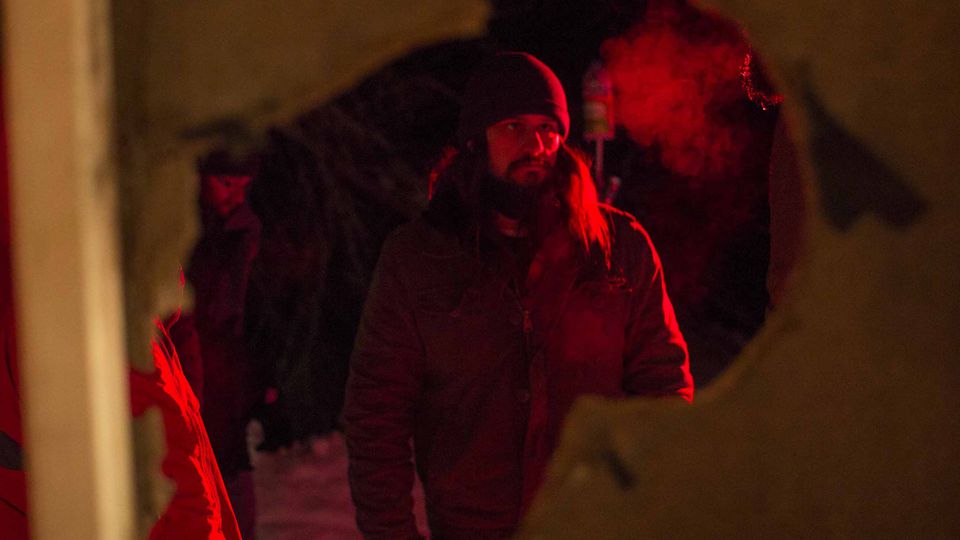 As a film fanatic who cranked out his own short films as a teenager, JOE BEGOS couldn’t have found a more appropriate mentor. Spending nearly four years working in development with horror filmmaker Stuart Gordon (Re-Animator), Begos went on to make his first low-budget feature Almost Human in 2013. Joe is back with his second feature film THE MIND’S EYE, which is now available in theaters, VOD, and Digital HD from RLJ Entertainment. The film concerns a telekinetic couple (Graham Skipper and Lauren Ashley Carter) on the run from the deranged Dr. Slovak (John Speredakos), who wants to harvest their powers for his own needs. Larry Fessenden and Noah Segan co-star.

[UPDATE: The Mind’s Eye is now available to stream on Tubi, Hoopla, and Shudder.]

In a special guest post for SAGindie, Joe explains how he pulled off filming one of The Mind’s Eye‘s most complicated (and bloody) special-effects scenes without going over-budget.

“LIKE BISHOP! LIKE F*CKING BISHOP!” I drop the camera into my 2nd AC’s (Brian Dutton) hands as he fumbles it and I bolt across the hazy, blood-drenched, and red bulb-seared basement set of a telekinetic holding room. We’re attempting to tear a body in half in a wide shot, the torso flinging across the room at a high speed thanks to Dr. Slovak’s murderous telekinesis. We’ve tried it about half a dozen times, and it’s just not f*cking working. Problem is, I want it to look as good as Bishop’s demise in Aliens, when he’s torn the f*ck in half at the hands of the Queen Alien.

Outside the tight, 2:39:1 composition I’ve framed up, the room looks like some sort of military training course, with no less than half a dozen thick, tight wires pulled across the room in various directions. At the end of every wire stands a technician, attempting to coordinate a highly complicated sequence of events in a steaming hot room on hour 15 of an overnight.

On paper, it sounded so much easier. The telekinetic would blow the lights out, causing the back-up generator to wash the room in a hazy red. When our telekinetically mutated evil doctor shows up to confront the rogue patient, a small battle of the minds occurs. Beds fly, people get lifted, lights strobe, and somebody gets ripped in half.

Let’s back up a little bit. 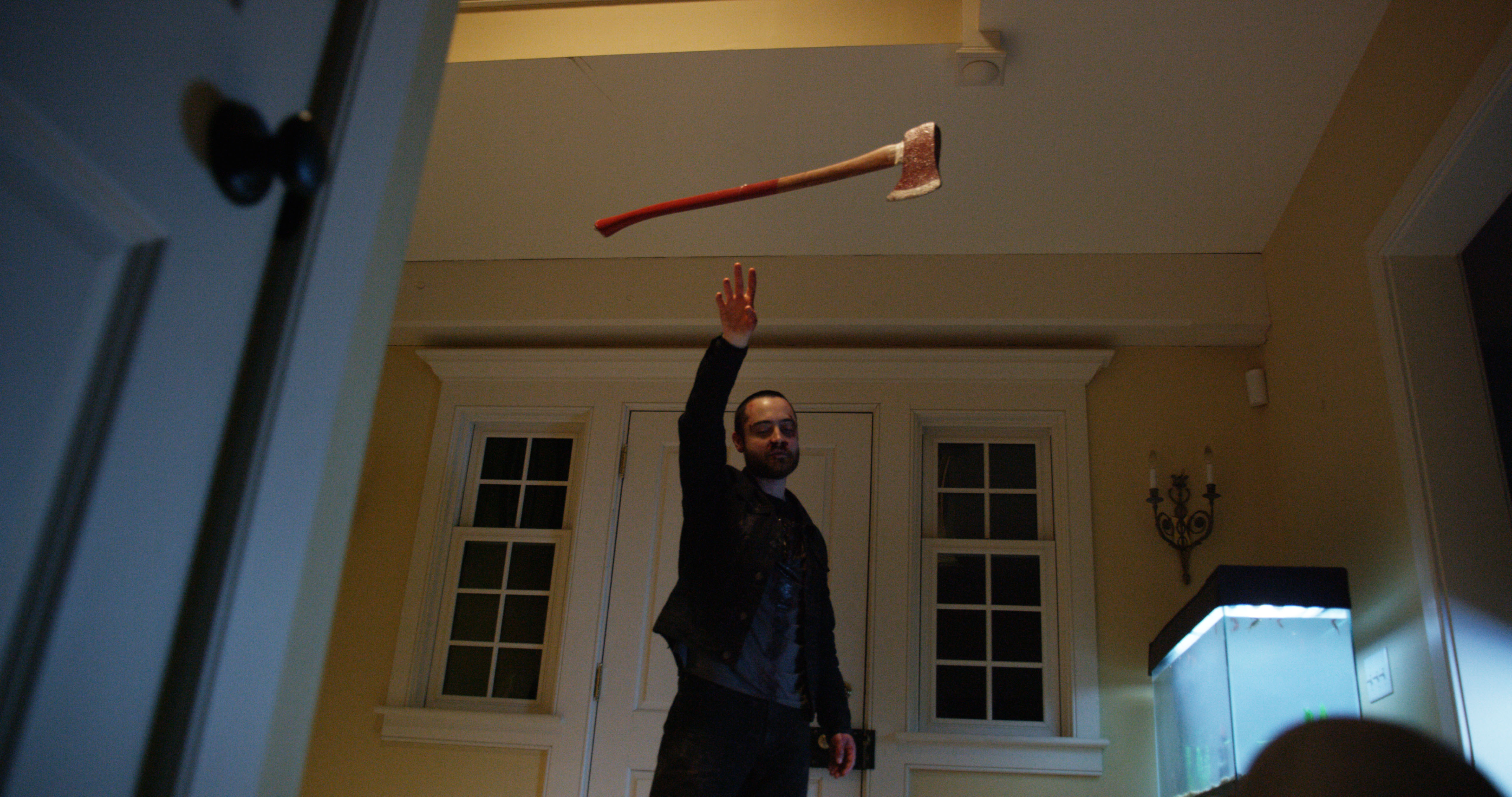 Six months prior to this basement scenario, I’m pushing my script The Mind’s Eye in front of anyone who will listen. I’m excited. My first movie made money. Got decent reviews. FINALLY somebody is going to open their wallet and shell out some money for me to REALLY blow some shit up! WHO DOESN’T WANT TO SEE DEATH WISH MEETS SCANNERS?!?

Not many people besides me, it would seem.

“Why does it have to be so violent?”

“How the hell are you going to pull this off for a million?”

“Make it more like Chronicle and we can talk.”

This is just some of the hot garbage I heard spew from uninformed mouths while I was desperately trying to put this movie together. It made zero sense to me. I had a schedule, a budget, and an extremely detailed plan of how I planned to pull off every single thing in the script. But nobody wanted to hear it. Whatever fire I had inside me to make this movie, the excitement that was driving me just increased every time somebody uttered words like this to me.

I needed a new approach. We had to do it privately. Where nobody could tell me what I can and can’t do. We cobbled together a significant sum from almost 15 investors, and as we were getting close to being able to kick off production I had convinced Zak Zeman (V/H/S trilogy, Late Phases) to come on board, and god bless him he trusted us and let us do what we needed to do the movie right.

As long as we didn’t go over budget.

The budget that was now 1/3 what it needed to be.

And I hadn’t rewritten anything in the script. I, along with my producing partners, would produce it ourselves. For most of our lives, we’d self-financed everything we had done, so if anybody knew how to NOT go over budget simply because the money didn’t exist, it was us.

Now that you have a better sense of just HOW strapped we were, let’s fast forward six months, back to the scene in question, this 20×20 cabin in the middle of a snow-drenched forest. A cabin with zero bedrooms. Sort of a pain in the ass for a location that is written to have what is considered a “holding room.” We could shoot it elsewhere, or build a set in the basement. We opted to build the set (thus allowing us to recycle the wood for future sets and set extensions, that’s how f*cking low budget we were), around the giant f*cking boiler sitting in the middle of the already tiny basement, so now we are looking at a room that’s MAYBE 6×12. You can say this location isn’t even ideal to shoot a f*cking dialogue scene with zero staging, let alone a telekinetic battle with pyro, puppet, and makeup effects. But we had no choice. Plus, LOOK AT ALL THAT COOL WOOD PANELING WE GOT TO PUT UP!

FOR STARTERS, the puppet that we were attempting to pull apart looked NOTHING like the actor it was doubling for, which presented a small problem. Part of this I was hoping to disguise with the sporadic strobing that was going to take place, but we couldn’t get the lighting to work right, thus causing us to have a constant red light blinding onto the face of this mannequin-esque body double.

So now to get around the fact that we can’t shoot this f*cking thing’s face, I decide to get WAY BACK (or as far back as this tiny room will allow) and shoot the shot on a long lens, putting the puppet a wee bit out of focus, with the dirty over-the-shoulder of Dr. Slovak in focus. When I called for the bodies to be torn, I’d slam the focus towards the puppet, bringing it in sharp as a nail RIGHT when the body cyclones in a torrent of blood, not giving us time to grasp the features of the explosion of violence we are seeing.

Every time we’d try to land this though, the body would flop to the ground, and the blood would spurt like a geriatric ejaculation. This was NOT reminiscent of Bishop’s demise, hence my “BISHOP!” hollering instantly following my scream of “CUT!” Something needed to be done. More power behind the body pull. A tighter frame. More frenetic blood spurt, you know, like the type you would see when a spinal cord was torn from your skeletal system. 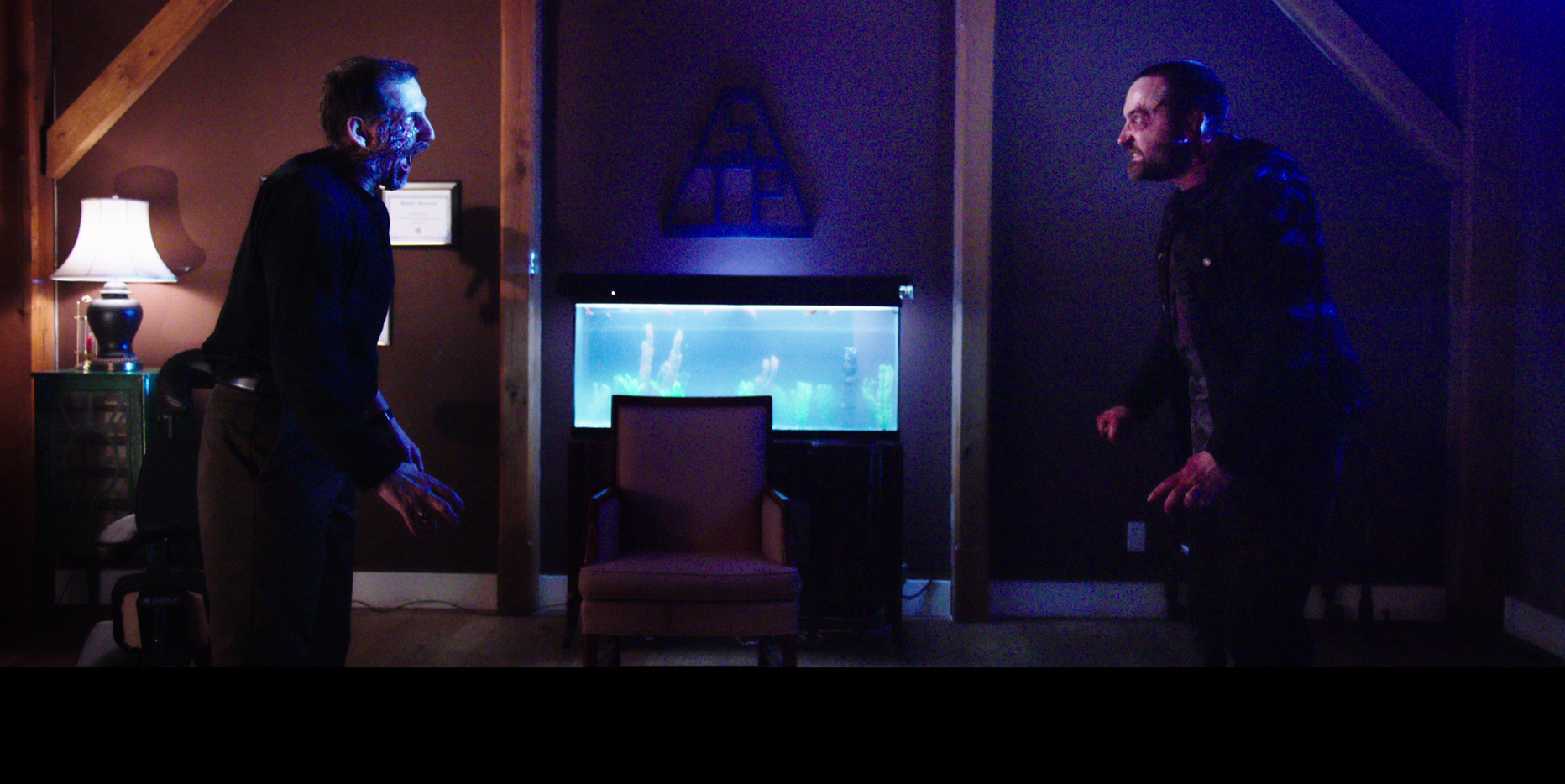 First, we needed to fix the body rip. We had a hook implanted in the OPPOSITE shoulder than we were pulling, so we could give the puppet the desired “CYCLONE” effect, masking its face and giving us a tsunami of blood. We got an extra guy on the end of the wire, and snaked it through the doorway to give them longer range. Also, this gave me a clearer frame. Two birds with one stone.

Now I needed to deal with the blood, or the geriatric ejaculation as it most closely resembled. The tubing itself was hooked up to some sort of f*cking giant air pressurizer, the kind that you think might be TOO much. “What’s the problem?” I ask my makeup guys as I crouch next to it, wondering why the f*ck me blowing through a garden hose can render a more useful effect. After soon realizing that this bad boy wasn’t building the pressure to its maximum, we quickly changed that. During the next take, if you were to take a peek at the pressure control, it would be bouncing around in the red, like one of the racecar insert shots right before the engine blows in a f*cking Tony Scott movie. Now we’ve got a f*cking blood EXPLOSION.

We ran the take a few more times, getting closer with every take, causing the basement floor to be FLOODED with blood. I was shooting knees up, so thankfully we couldn’t see it, but we needed to nail this thing, and FAST.

Brian (the 2nd AC) puts the camera back on my shoulder for what must be take 12. Everyone’s tensions are on edge. We just need to nail this shot, and we can all go home. And everyone knows we won’t leave until we DO nail it.

I frame up the shot. Nice and tight, very little wires in the shot, and I practice my race and slight whip. Something still feels off, not as frenetic as we need it to sell the fact we really don’t have the means to pull of this complicated effect.

“Brandon!” I yell out to my gaffer. “Let’s crank these reds brighter!” The room gets bright, almost hotter in an instant. I use the overexposure to CRANK my shutter speed. I may have hit a 500 shutter angle, I can’t remember, but whatever it was, it f*cking worked. I saw it through the lens, and I felt it in my gut.

“CUT!” I yell, followed by a riotous giggle and a “F*CK YEAH!” My crew knows we got it. That’s my primal reaction to a multiple-take gag FINALLY WORKING. I grab Brian Spears (Makeup Effects) and drag him over to the monitor to watch playback.

I see the body rip play out on a 19-inch HD monitor, feeling even more giddy than before. I snap my head over to Spears, who still has a scowl on his face.

He’s right. It didn’t look like Bishop. But for a bunch of people who had no idea how they were going to pull this off in a tiny basement, and a puppet with no facial features, and not an extra dollar to spend, it looked pretty goddamn good.

Get more updates and info from Joe by following him on Twitter.