Yep. The season to end all seasons has just… Ended (what?!). Point is, I survived. Now, I’m not one of those high-falutin’ Hollywood folks who get to go to all the fancy functions. When I… falute, it’s strictly pretty low. But even I get a few perks now and again. 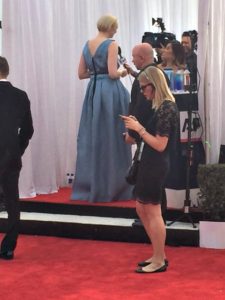 SO, really cool. An awards show where all the beautiful people are. This also accounts for FORMAL DRESS #1. The awards were fine, but the real coup is after the awards when you go behind the stage to the after-party. What do I notice first? Amongst a few tables of food, there is one that is piled high with ice, shrimp and easy-to-hold crab claws!

[An hour later] And there are all the actors that were at the show. My highlights were watching from 30 feet away (I was too scared to get any closer, she’s so amazing) Gwendoline Christie who had to be rocking 4” heels. Love her and could not figure out a way to say hello without fawning, so I stood next to a table and gawked. Cuz I’m cool like that.

Second best thing was A) Getting to talk to Allen Leech (Downton Abbey) who is always just as nice as can be, and B) Watching most of the cast of Downton Abbey dance to Tupac/Dr. Dre’s “California Love.” I mean, really!!! 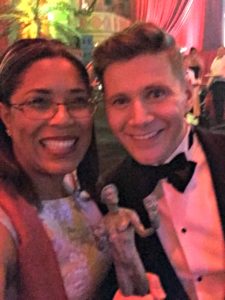 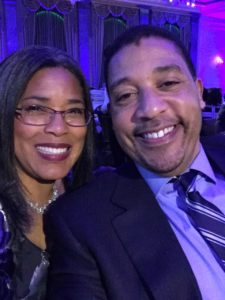 FORMAL DRESS #2 – This is a great award event because they announce the winners ahead of time – so you mostly know who will be there. And so many stars come out for this. Note: AAFCA does not only award Black film but all films of merit. This year, The Danish Girl was included in those heralded. Not to be all low-falutin’ again, but the hors d’oeuvres before the show are some of the best around. Yeah, I’m that girl who remembers the food. The speeches were great, and it was good to see how people really understand how important film criticism can be for a film. 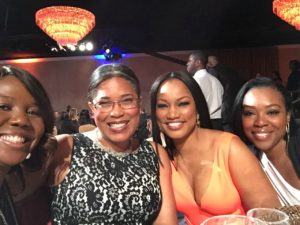 FORMAL DRESS #3 – This awards show, later aired on BET, was really a chance to honor Black films, actors and icons from the Black community. Highlights – getting to meet and shake hands with DIAHANN CARROLL!!! Seriously!!! And hearing Regina King give an amazing speech. Lots of champagne and cocktails, which is never bad, and Morris Day and the Time closed the evening! 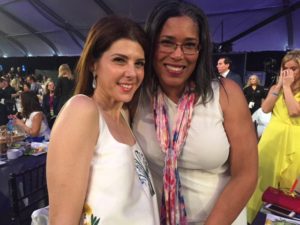 FORMAL(ish) DRESS #4 – The Spirit Awards are always amazing fun, if not completely exhausting. The day was great despite the heavy fog for the first half. We had a great table: Marisa Tomei is amazing and so nice! Nikki Reed and Ian Somerhalder were too beautiful and we tried not to hate on their loveliness. But I’m petty so I was jealous. And MY highlight was getting to hang out and talk with Aisha Tyler (sploosh!) and Retta, both of whom are the smartest, funniest women IN THE WORLD. I dare you to disagree. 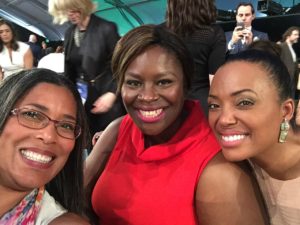 The show was good and Kate McKinnon and Kumail Nanjiani were the best hosts in recent memory. It is so hard to make that audience laugh, and they killed it. And let’s just say, Paul Dano is a champ. A small aside: Kudos for Maker’s Mark for sponsoring and for Breyer’s for introducing me to their new gelato product. I still dream about that chocolate/peanut butter deliciousness. 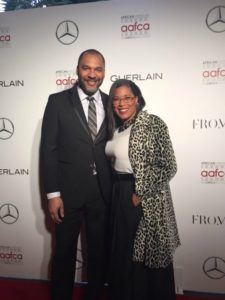 NO! Of course I didn’t go. Remember, LOW-falutin’. But I went to two parties, so FORMAL DRESS #5 and FORMAL DRESS #6. First party was big, lavish, held at a lavish hotel and was thrown by AAFCA. They had good food (yes, again, I STAY hungry) and plenty of TV’s up loud enough for everyone to hear. The second party was at an “undisclosed location” so we dropped the car off at a parking garage, climbed on a shuttle and went high into the hills. I knew it would be great when I was greeted with a very alcoholic slushee. I, amazingly, was full so I didn’t try the food. But I did sample some (more) champagne and that was very nice. While it was harder to hear and a little less comfortable, it was still a good time. And when Leo won, a massive cheer went up throughout the room! I don’t know if they all thought Leo was winning one for them all, or that they are his best friends, or that he could even hear them, but there were cheers and tears. Yeah, that. We managed to close the evening fairly early, being extremely tired. But not before hearing a group of [I’m going to keep that noun to myself] referring to Uber and “Ubes”. NO. Just… Don’t.

So, while I am STILL tired from the many events I attended, I would say I had a good award season. There were a few events I wanted to go to and couldn’t, but I had a nice run of things. I learned that 1) It’s all about pacing, especially when drinking, 2) It’s impossible to be cool when encountering someone who you have a major girl crush on (grammar schmammer), and 3) I AM OFFICIALLY OUT OF FORMAL CLOTHES!!! My dry cleaning bill is going to be monster.