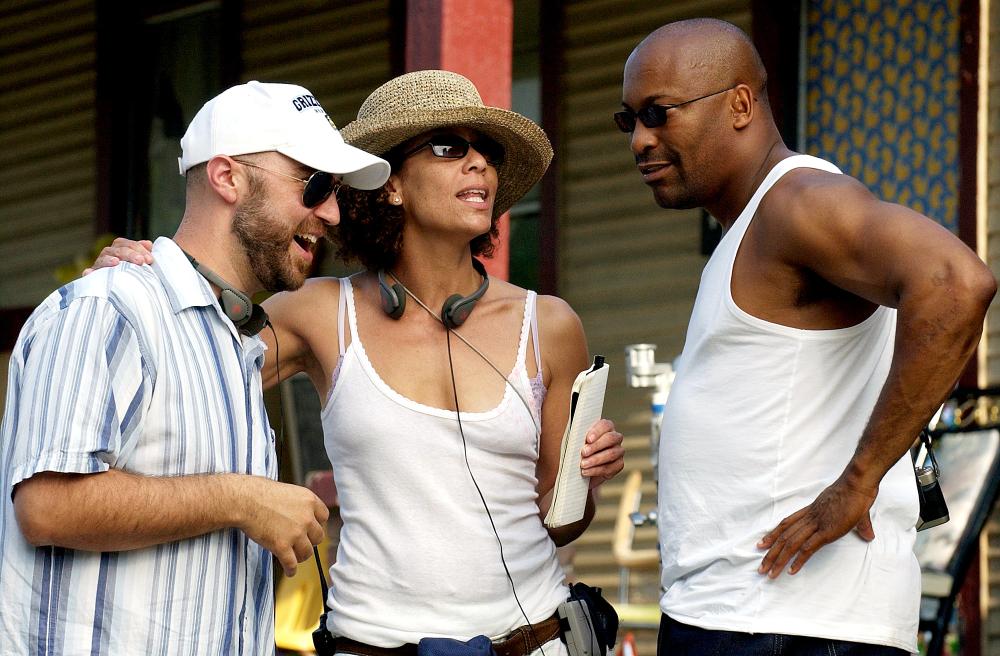 Yep, it’s that time of year again. The Sundance Film Festival has come and gone, delivering a new crop of compelling, cutting edge independent films. This year all the buzz was over HUSTLE & FLOW, a low budget drama about a small­-time Memphis pimp who dreams of becoming a big-­time hip hop artist. Not only was the film greeted with critical acclaim, but also Paramount Classics teamed with MTV Films to offer up a record­-breaking distribution deal. Hustle & Flow is populated with a heavy-hitting line­up of character actors like Anthony Anderson and Isaac Hayes and a break­out lead performance from Terrence Dashon Howard as DJay the pimp.

SAGINDIE: How did you become a filmmaker?

STEPHANIE ALLAIN: I had no designs on filmmaking, it sort of just happened to me. I started reading scripts at Fox for Amy Pascal. And I really had a knack for analyzing material and giving notes to the writers. So, I followed her to Columbia. She said if I worked for her for a year she would promote me to creative executive and that’s exactly what happened. 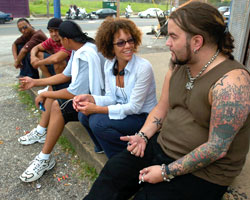 How did you find this project?

SA: An agent who I’ve known for years called me and said, “You have to read this script.” So I started to read it and I got about halfway through and I called him back and said, “Oh my God, this is fantastic.” Every scene in the script was incredible; it had great pacing, fully-realized characters and strong dialogue. I knew I was in the hands of a master storyteller. The original ending was a little darker than it ended up and I had a few concerns about that, but I was ready to give [writer/director] Craig Brewer a call and tell him what a wonderful job he’d done and how much I wanted to produce it.

And you brought the lead actor Terrence Howard to the film?

SA: I had always been a fan of Terrence’s work. I was in the process of casting Biker Boyz and a mutual friend had brought us together and I chatted him up. I told him all about the script and he was like, “No way, I can’t go there, I’m a method actor and it would be bad for me.” But, I just had the feeling he would be perfect for the role. At this point we had no deal, no studio, no money to offer – nothing, but I figured the way to make it happen was to create it from scratch. As soon as you get things started people begin to believe. We finally got him to read the script and he saw what we saw in it and committed.

And the rest of the cast?

SA: We knew we were going to have trouble finding money for the movie. And there were certain studios and other entities that wanted us not to cast for ability but for box office. A lot of people wanted us to attach a rapper for the lead. Craig and I committed to Terrence early on. We had to tell a lot of people, “Sorry but Terrence is our DJay.” Fortunately, when you have a really good piece of material and you are passionate about it, and you stick with it and are persistent, people will start to listen. And that’s what happened. It’s an actor’s dream to find a project like this; all the roles in the film are great. So people started to commit without a deal in place because they knew that this was special.

You also brought John Singleton to the film?

SA: Craig did his first film for $20,000 and I figured, Forget it, we can get some money together and just do it. We’ll own it and it will be great – fuck Hollywood. Then reality set in, I realized that I was going to have to sell my Hancock Park house to make this happen. So I did it and put the first half of the money I got from the sale of the house into the movie and then I’m going to go out and find the other half. I had $200,000 and I figured, I’m going to find another $200,000 and make it for $400,000. So I thought about it and I knew the only one who was crazy enough to do it was John. I visited him on the set of 2 Fast 2 Furious and I told him, “Let’s be moguls. Let’s be owners.” And I gave him the script and then I didn’t hear back from him. Finally, two months later he calls me from Miami from the premiere of 2 Fast and says, “Oh my God, this is great.” So with John on-board we could go back to all those places that turned us down and get the money we needed. John brought Ludacris to the film and we had everybody, we had Anthony Anderson, Taryn Manning, and we still couldn’t get it greenlit. People just didn’t get it. So John said, “You know what? I’m going to greenlight it.” And that was it. We did a budget, which we felt was do­able, really professional, but as low as we could make it, $3 million.

Did you take advantage of the SAG Diversity Incentives for this film?

SA: Absolutely we did. Am I happy that there are diversity incentives? Not really. It doesn’t seem fair that if you’re black you can make less and that’s okay. But it allowed us to make the movie for the budget that we had and still be SAG. It was important for us to be DGA and WGA and SAG. People work hard to get those affiliations and we wanted people to be able to work inside their unions.

Was the homage to Blaxploitation intentional?

SA: There’s a nod. But the Blaxploitation era of filmmaking glorified pimps, as do a lot of music videos. We wanted to recognize the genre but show what a real pimp’s life is like. Trapped in a sweaty Chevy Caprice getting your girl to turn tricks in the back seat for twenty dollars a pop. We felt a lot of the resistance setting the film up because people thought that we were returning to the same old glorifying pimps and hos story. There were some people who thought we should change the role of DJay to a mailman before they could get behind this. The reason we kept the lead character as a pimp was that he was the lowest of the low being exalted by creativity. If he had have been a clerk at a 7­-11 it just wouldn’t be the same. 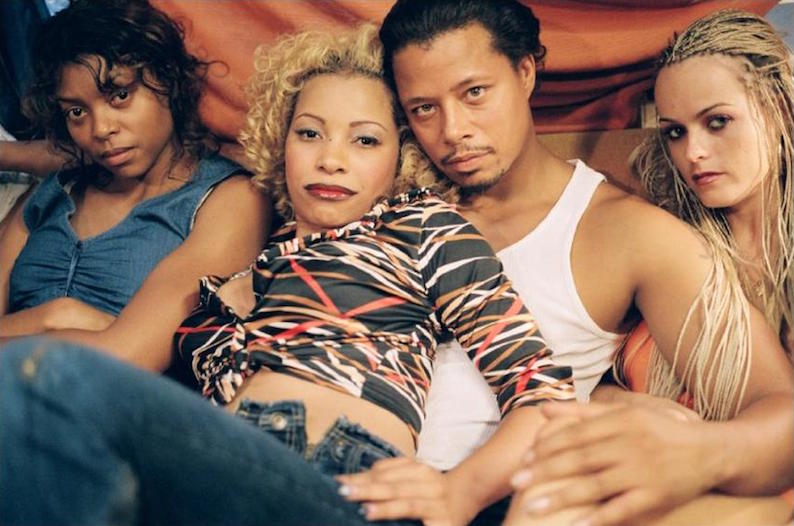 Why did you choose to shoot on Super 16mm?

SA: We wanted to give Craig as much fluidity in shooting as he was used to, and 35mm cameras were just too big. We knew that shooting with 16mm cameras we could get into tight places we needed for coverage. Everything you see in the movie is a real location and that means there isn’t a lot of space to set up your camera. The A­minima camera allowed him to move around and use stylistic movement that Craig had discovered in his first film Poor & Hungry. The film also cost less and the cameras were cheaper to rent. We got a great deal at Panavision. And we wanted it to be grainy, and feel real. We studied Taxi Driver and Midnight Cowboy so we could capture the ’70s vibe.

Music is key to this story, how did you get the soundtrack together?

SA: We knew that we wanted to highlight the Memphis Crunk sound. Craig knew these rappers in Memphis who were creating this music out of their back rooms. And that’s one of the reasons the script spoke to me, I had a teenage son who was doing just that at the time I read the script. Al Kapone was a dude that Craig knew, and when John got involved he brought Three 6 Mafia, who had done a track for him on his film Baby Boy. So they both wrote and recorded songs for the movie and then Terrence came in and re-did the vocal tracks in place of theirs. It was really a difficult process because Terrence really fought against the rap music. He really wanted to use his own folk music but Craig was emphatic about the Memphis Crunk sound.

Will you be releasing a soundtrack album?

SA: We made a deal with Disturbing the Peace, Ludacris’s company, to represent the music. And they are shopping it around to different labels. Hopefully that will be out in advance of the movie. 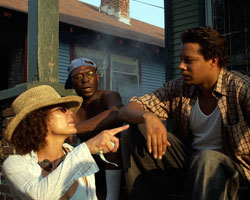 What was the biggest challenge you faced in making this film?

SA: Time. Our schedule was twenty­-four days, six­-day weeks. This is a huge drama with four complex musical numbers, and trying to cram all that stuff into twenty­-four days while maintaining quality was damn near impossible. Luckily, we had Amy Vincent as our DP; she is a genius and an artist. She was on-board two years before we started and was thinking and figuring it all out visually way in advance.

SA: No, I was lucky. John decided he was going to find the whole three million himself. I did spend some money flying Craig out to Los Angeles and putting him up in hotels and paying his rent while he worked on the project.

What are you working on now?

SA: Well, as we were shooting Hustle & Flow I was setting up my next film, a romantic comedy called 42.4. As Crunk, raw, and real as Hustle & Flow is, this is the complete opposite. It’s an upscale chick­ flick dealing with the conundrum of being a professional black woman while trying to maintain a relationship.

Any suggestions for up-­and-­coming filmmakers?

SA: Find something that you are so passionate about that you are willing to sell your house to get it done. Because if you can find something that excellent to you, then you will have the fortitude, the passion, and persistence to see it through. And if you don’t feel that way about it, just drop it and move on to something else.

According to industry trades, Hustle & Flow made a record­-breaking distribution deal at Sundance. Hustle & Flow will be released theatrically July 15th through Paramount Classics and MTV Films.

[UPDATE: Hustle & Flow is available to stream on Amazon Prime, Hoopla, and Tubi.]
__