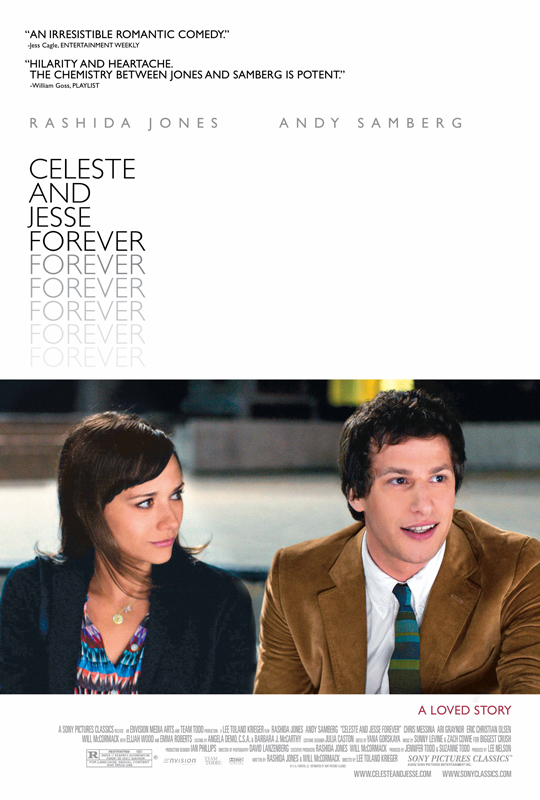 On August 3rd, Sony Pictures Classics released CELESTE AND JESSE FOREVER to limited audiences in LA and NYC. The film, directed by Lee Toland Krieger (The Vicious Kind), follows the lives of two amicable exes, and soon-to-be divorcees, Celeste (Rashida Jones) and Jesse (Andy Samberg). After six years of marriage, Celeste, a marketing executive who studies trends, separated from sweet but career-stunted Jesse, a struggling artist. Although they have ended the marriage, they still get along as best friends do, and they spend an inordinate amount of time together. It seems the couple is unwilling to let go of their bond.

Celeste holds the reins of the relationship with her workaholic, high-energy personality while Jesse just goes with the flow. It is unclear if his reluctance to change is solely due to his feelings for Celeste or if it’s due to simple laziness.  Either way, life as they know it comes to a screeching halt when a one-night stand comes back into Jesse’s life. Celeste finds herself no longer the leader of their future, which disrupts her entire world. The screenplay, written by Rashida Jones and actor Will McCormack, takes some fresh twists and turns as it wraps itself up in conventional rom-com packaging.

Some of the sub-plot conventions, i.e. Celeste’s job (Still, in almost every romantic comedy the female lead works in marketing or for a magazine/newspaper for some reason.), her gay advice-spouting co-worker (Elijah Wood), her work troubles, which culminate at just the right moment, bring down the story’s energy. These conventions may be used ironically, but the film does not make that clear. That being said, the character development is fresh and audiences will find themselves contemplating questions on the gray areas of love and romance, including the different aspects of what it truly means to love someone forever.

The strongest element this film has going for it is the element of surprise. It is a romantic comedy in a general sense, but it does more with its character relationships than is usually handled in formulaic “rom-coms.” The story feels organic and charming, not contrite or totally predictable, but it falls short of joining the ranks of, say, greats like When Harry Met Sally. Its honesty is appealing though, and it deserves a watch by anyone looking for something a little different.