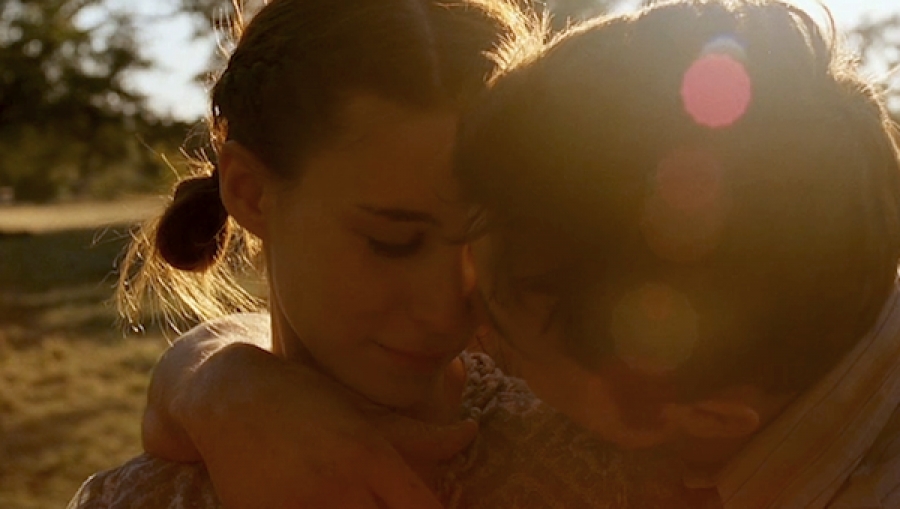 AIN’T THEM BODIES SAINTS premiered in January at Sundance 2013. The following Theatrical Premiere took place on Tuesday (August 13th) at the Museum of Modern Art in New York City. The film stars Casey Affleck as Bob Muldoon and Rooney Mara (The Girl with the Dragon Tattoo, The Social Network) as Ruth Guthrie. These childhood sweethearts and partners-in-crime are on the lam, and just as the film begins, Ruth reveals that she is pregnant. Ain’t Them Bodies Saints does not follow a couple’s joyride; it begins as their crime spree comes to a screeching halt.

To protect his love and unborn child, Bob manages to take most of the heat for their crimes and ends up sentenced to twenty-five years in prison. Years pass and the couple’s daughter Sylvie, now almost four, anticipates her upcoming birthday while Ruth lives a very quiet life in their small town. All of that may change when Ruth hears from soft-spoken sheriff Patrick (Ben Foster, Six Feet Under, 3:10 to Yuma) that Bob has escaped from prison.

Beautiful cinematography and a 1970s setting lends Ain’t Them Bodies Saints a nostalgic, honey-drenched look. The story moves slowly; this isn’t a shoot-em-up style movie, but each scene is dense in character and subtext. There is something wonderfully refreshing about a movie that chooses to move in measured paces and give its audience a lot of character to take in every step of the way. A subtle love triangle unfolds as Patrick tries to spend more time with Ruth and Sylvie, and Ruth is constantly in a state of remembering. Her thoughts seem lost between her loyalty to Bob and her motherly duties to protect Sylvie. Tension mounts as Bob risks his life to get closer to Ruth; he is hunted by those he’s entangled with in his past.

Writer and director David Lowery borrows from filmmakers, such as Terrence Malick, crafting scenes that feel both new and old. It works for this film as the entire story feels like a throwback to another era. The performances are solid with Ben Foster standing out as a simple sheriff with a lot of turmoil brooding under the surface, and Affleck and Mara sell their roles well. This is the kind of film where what’s not said is just as important, perhaps more important, than what is said. Ain’t Them Bodies Saints became one of my top two movies from Sundance 2013. Check it out, if you can!

—–
In addition to her duties at SAGindie, Ellen Tremiti is also a Contributor for Fanboy Comics, an online conglomerate of geek media, providing its readers with daily reviews, interviews, and podcasts that span the pop culture spectrum. For more interviews, blogs, and reviews by Ellen and the FBC staff, check out the Fanboy Comics website or sign up for the e-newsletter, The Fanboy Scoop, by emailing subscribe@fanboycomics.net.