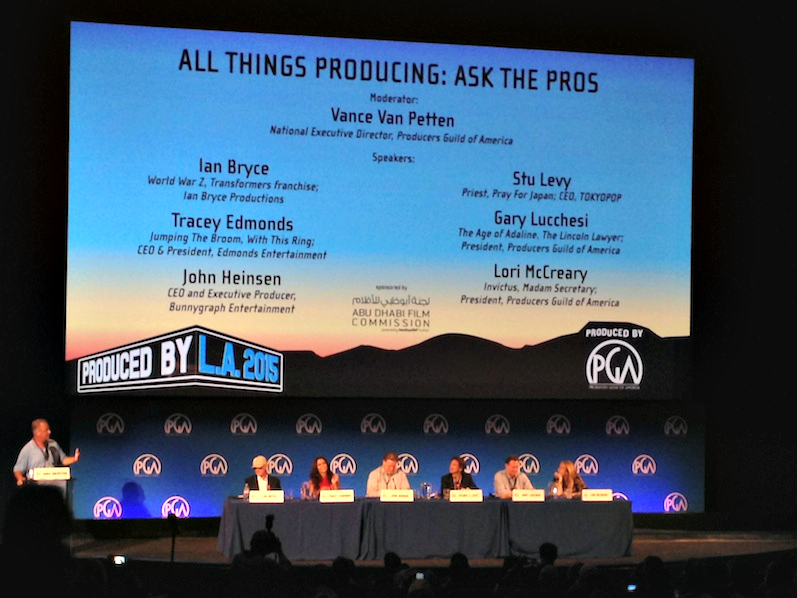 SAGindie was a sponsor of this past weekend’s Produced By Conference, taking place at Paramount Pictures Studios in Hollywood. The annual event, put on by the Producers Guild of America, brought together filmmakers, studio execs, distributors, financiers, and more to discuss the various ins and outs of film, TV, and new media production.

8/6/15 UPDATE: The PGA has uploaded some videos of the panels to their YouTube site, which are worth checking out. Two select clips of interest below, featuring producer Jason Blum:

“The $3-5 million figure [Blumhouse works within] is not a random picked number. That amount is about what we are able to recoup on the movies if we don’t get a wide release. In a worst case scenario, we break even and maybe lose a little money but not very much, and everyone gets paid scale… That budget is reverse-engineered to thinking that if the movie isn’t in wide release, at least we get our money back and can keep our doors open… We’re at a place in our lives when we could be doing expensive movies. We choose not to because there’s a real correlation of not spending money and having fun.” –Jason Blum, (Founder/CEO, Blumhouse Productions)

“Tax incentives more than ever have become a huge part of what we have to do. It’s an absolute must as a part of the profitability model… You can’t do enough homework up front.” –David Glasser (COO, The Weinstein Company)

“We are looking for great female parts. If she’s the girlfriend or the wife, probably don’t send it to us.” –Reese Witherspoon (Founder, Pacific Standard Films)

“When I’m sold on a project, I’ve never made it through the 10 sentences [of pitching]. You understand your story and can break it down in that way, and you will then have a road map you can give to the executives.” –Marshall Herskovitz (Producer, The Last Samurai, Love & Other Drugs)

“We try to rarely shoot six days a week, and we try to rarely do all-nighters. Because both of those things are really hard on the crew. We like to take care of the crew, and you get better creative when everyone feels rested and taken care of.” –Jeanette Volturno-Brill (Head of Production, Blumhouse Productions)

“You have to know your audience; you have to be able to work with a team; you have to create awareness, word of mouth and buzz, which creates box office; and the last thing you need is money. You have to have resources to do all these things.” –Russell Schwartz (President, Pandemic Marketing)

“I am a strict believer that movies are not going away. Will Netflix kill the movie theater? No!… Movies are getting greater and audiences are getting more involved. Audiences want to be swamped with visions they couldn’t come up with themselves.” –Sophie Watts (President, STX Entertainment)

“For every Paranormal Activity, there’s twenty of them that don’t work. If you want to get your film distributed around the world, you’ve got to knock it out of the park in every way.” –Jonathan Deckter (President, Voltage Entertainment)

On if you had to start your career over today: “I would go online and start putting it on YouTube if you had to for free and let people pick it up. I think eyeballs are the key.” –Lori McCreary (Producer, Invictus, The Magic of Belle Isle)

On his post-Clerks 2 career: “I walked away because I lost personal shit to say. That was the only way I knew how to do the job — to steal from my life… There are so many paths into that [Hollywood] house. Everyone tries the front door, and that is valid, but there are tons of back windows.” –Kevin Smith (Filmmaker, Clerks, Tusk)

On how to get distributors to see your low-budget film: “It’s really easy; just sent them to me. I’ll watch just about anything… or at least part of anything.” –Richard Abramowitz (President, Ambramorama Entertainment)

For a fuller event recap, head over to the PGA’s blog.

WHAT WERE YOUR PRODUCED BY HIGHLIGHTS?
——